Magawa, the ‘hero rat’ that spotted over 100 landmines, dies aged 8 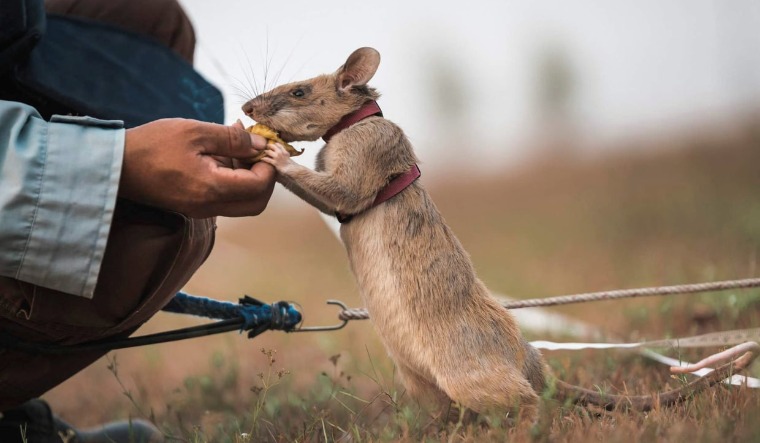 Magawa, the “hero rat” that was awarded a gold medal for its bravery, has died aged 8. The African giant pouched rat sniffed out over 100 landmines and explosives during its five-year career in Cambodia.

The landmine-spotting rodent was honoured with the gold medal for “lifesaving bravery and devotion to duty” from the UK-based People’s Dispensary for Sick Animals in 2020. Magawa is the first rat to receive the award.

The first mass use of mines in Cambodia was in the 1980s when a 700km-long minefield was built along the entire Cambodian-Thai border by Vietnamese forces. Thereafter, more mines were laid by the Vietnamese government and by Khmer Rouge forces.

With about 4-6 million landmines littered across the nation, Cambodia is one of the most heavily mined nations on earth. According to the United Nations Development Program, Cambodia recorded 4,320 people killed or wounded by landmines during the year 1996.

The APOPO is among the many organisations that help in demining the scarred lands of Cambodia.

The APOPO (Anti-Personnel Landmines Removal Product Development) is a Belgian-registered NGO and a US non-profit that trains African giant pouched rats to identify landmines and tuberculosis. These rats are called ‘HeroRATs’.

The APOPO project was launched by Bart Weetjens and Christophe Cox on November 1, 1997.

The African giant pouched rats were chosen because of their African origins and long life span of up to eight years.

The rats are bred and trained at APOPO Training & Research Center in Morogoro, Tanzania. The rats at 4-5 weeks are “socialised” with the surroundings. Later, at about 10 weeks, they have the basic training where they hear clickers and associate them with food rewards. Next, they learn to differentiate between everyday smells and target smells of TNT or tuberculosis.

By the end of their training, they will be ‘heroes’ in sniffing out targets.

Rats have a high and developed sense of smell, apart from the fact that they are easy to train. They weigh little, cancelling the risk of setting off landmines. They are cheap to take care of and are indigenous to sub-Saharan Africa. Moreover, they have a lifespan of about 6-8 years.

Using rats is less dangerous for humans who have to disarm and remove the weapons.

According to APOPO, a HeroRAT can check 2,200sqft in around 20 minutes, while a human deminer with a metal detector will take up to 4 days for the task. Further, unlike dogs, they do not form bonds with their trainers and are motivated to work for food.

On Monday, three Cambodians from the Cambodia Self-Help Demining group were killed by blasts from anti-tank mines while clearing the mines, illustrating the extreme risks involved and showcasing the need for HeroRATs.

Magawa was born in November 2013 at the Sokoine University of Agriculture in Tanzania. It is here that he learned to use his amazing sense of smell to detect explosives. He moved to Siem Reap in Cambodia three years later, where he began his mission to save lives.

On Tuesday, APOPO announced: “It is with a heavy heart that we share the sad news that HeroRAT Magawa passed away peacefully this weekend. Magawa was in good health and spent most of last week playing with his usual enthusiasm, but towards the weekend he started to slow down, napping more and showing less interest in food in his last days. Magawa had recently celebrated his birthday in November, reaching the grand old age of 8.”

The organisation said that Magawa found over 100 landmines and that he is their most successful “hero rat” to date.

“His contribution allows communities in Cambodia to live, work and play; without fear of losing life or limb,” APOPO added.

The tribute said that Magawa had left a “lasting legacy in the lives that he saved”.