Both far-right and leftist candidates need to appease centrist voters 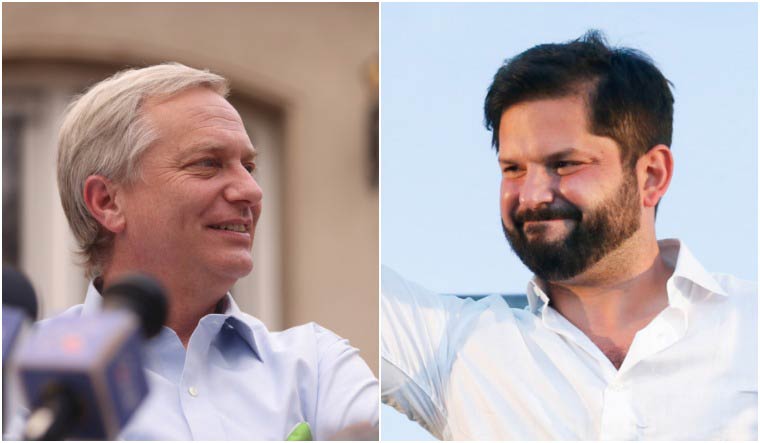 Right-wing candidate Antonio Kast emerged as the lead winner with 28 per cent votes in Chile's presidential elections, held on Sunday. This was predicted in the opinion polls before the election. He will now face the leftist Gabriel Boric (who got 26 per cent) in the second round to be held on 19 December.

The young Boric (35 years) was a student leader who participated in the anti-government protests and later got elected deputy in Congress.

The third and fourth positions went to two centre-right candidates who got around 12 per cent of votes each. Right-wing politicians also did better than expected in a congressional vote, taking about half of the seats in the senate. Going by this arithmetic, Kast could win the second round.

If Kast wins, it will be an anti-climax to the mass protests of recent years that sought inclusive development and reduction of inequality. The political protests resulted in the formation of a historic new Constituent Assembly which is seeking to correct the neo-liberal course set by the Pinochet military dictatorship. Most members of the Assembly are from the centre-left who seek to meet the expectations of the poor and middle-class, left out in the cold by the high cost of education and healthcare even as private businesses have been raking in high profits. This sin of omission was recognized publicly even by the right-wing Pinera himself who is doing his second term as President. Kast’s win is a huge disappointment for those framing the new constitution and the masses who have been fighting for social justice. Kast is opposed to the new constitution.

Kast wants to continue the Pinochet-era system and advocates the reduction of social spending and taxes on business. He is unapologetic about the military dictatorship. His brother was a minister in the Pinochet cabinet. So if he becomes President he should be prepared for the revival of violent agitations against social injustice. However, Kast is not an extreme rightist like Bolsonaro and Trump. He would be a little more right than the current president Pinera and he has already seen the limits and challenges faced by Pinera’s presidencies.

The Chilean voters have been voting for the Left and Right alternately in the last four presidential elections. Both the leftist and rightist presidents have been moderates and had avoided extreme positions. The Chileans might vote for a leftist next time if they elect a rightist this time.

In any case, the victory of Kast is not assured. It depends on how much the leftist and rightist candidates succeed in moving the centrist voters. Boric needs to take into account the frustrations of the centrists who were appalled by the extreme violence used by protestors who destroyed metro stations, burnt churches and fought with the police violently. Kast has pledged to strengthen law-and-order by cracking down on crime and violent protests. At the same time, Kast has to give some assurance to those who have been protesting for social justice.

The results of the elections show the continuing check and balance between the right and the left in a country whose democracy has become mature and resilient. Chilean voters have forced both Kast and Boric to move towards the centre and be more pragmatic. There cannot be a Bolsonaro or a Chavez in Chile.