The cause of the crash was not immediately clear 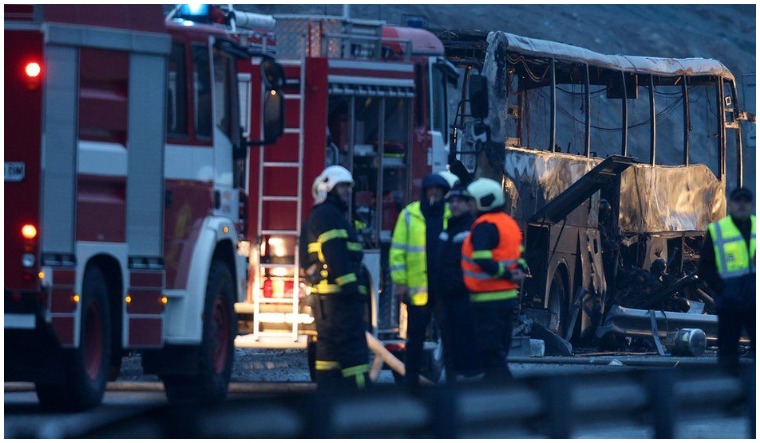 Rescue workers at the site of the crash | Reuters

The bus, which was registered in Northern Macedonia, crashed around 2 am and there were children among the victims, authorities said. Seven people were taken to hospitals for treatment.

Bulgarian news agency Novinite says representatives from Macedonia's embassy visited a hospital where some of the victims were taken.

The cause of the crash was not immediately clear. Interior Minister Boyko Rashkov told Reuters, "People are clustered inside and are burnt to ash."The picture is terrifying, terrifying. I have never seen anything like that before." "We have an enormous tragedy here," Bulgarian interim Prime Minister Stefan Yanev said.

Borislav Sarafov, the head of Bulgaria's investigative department, said four buses from a North Macedonian tourist operator entered Bulgaria late Monday from Turkey. The accident occurred on the Struma motorway, some 45 kilometres (28 miles) west of Sofia at 2 am. The coach party was returning to Skopje from a weekend holiday trip to Istanbul, according to North Macedonian Foreign Minister Bujar Osmani.