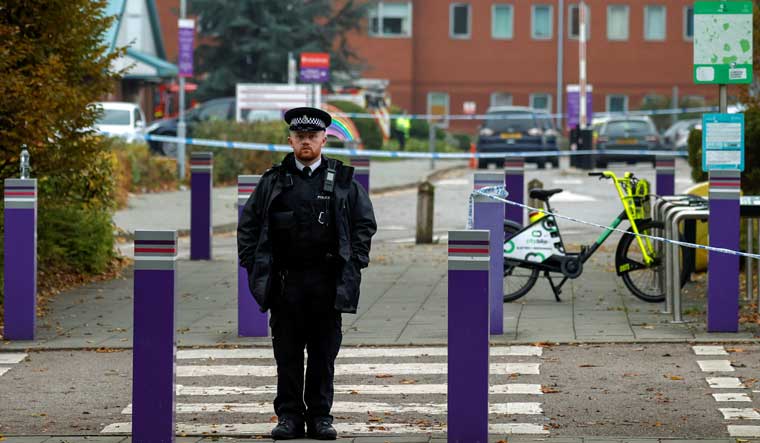 A police officer stands guard near the scene of a car blast at Liverpool Women's Hospital in Liverpool, Britain, November 15, 2021 | Reuters

Britain's Counter Terrorism Police are leading an investigation on Monday after arresting three male suspects aged between 21 and 29 under the Terrorism Act following an explosion outside a women's hospital in Liverpool which claimed one life on Sunday.

The blast involved a taxi and a male passenger of the car was declared dead at the scene outside Liverpool Women's Hospital and is yet to be formally identified. The local Merseyside Police said the driver of the taxi was taken to hospital where he is being treated for his injuries, which are not seen as life threatening.

"Detectives from Counter Terrorism Police North West continue to keep an open mind about the cause of the explosion and are working closely with colleagues at Merseyside Police as the investigation continues at pace," the force said in a statement.

"So far we understand that the car involved was a taxi which pulled up at the hospital shortly before the explosion occurred," the police statement said.

The incident took place around the time the UK fell silent for two minutes to mark Remembrance Sunday  marked annually on the second Sunday of November, to commemorate the contribution of British and Commonwealth military and civilian servicemen and women in the two World Wars and later conflicts.

British Prime Minister Boris Johnson and Home Secretary Priti Patel issued statements on Twitter in the wake of the explosion.

"My thoughts are with all those affected by the awful incident in Liverpool today. I want to thank the emergency services for their quick response and professionalism, and the police for their ongoing work on the investigation," Johnson said.

Our police and emergency services are working hard to establish what happened and it is right they are given the time and space to do so, Patel said.

In February, the UK's terror threat level was lowered from severe to substantial, which indicates that instead of an attack being highly likely they are now categorised as likely.

Images available online showed a car on fire and later burnt out. Phil Garrigan, chief fire officer of Merseyside Fire and Rescue Service, said the blaze was "fully developed" when his crews arrived and that the injured driver had escaped before it took hold.

"Staff from Mersey Fire and Rescue Service have been working throughout the day and were at the scene within a matter of minutes, said Garrigan.

We will be continuing our partnership with Merseyside Police and Liverpool city council by providing visible reassurance to communities affected and will be knocking on doors to speak to people in the area and check their welfare," he said.

Soon after the explosion, armed police raided several terraced houses in Sutcliffe Street in Liverpool, north-west England, where the three arrests were made. Sections of Sutcliffe Street and Boaler Street remain cordoned off, with a heavy police presence at the scene as inquiries continue.

Chief Constable Serena Kennedy, of Merseyside Police, sought to reassure the public, saying events of this nature were very rare and that there would be an increased and visible police presence on the streets in the coming days.

It is also important that, at this very early stage, people do not speculate about what has happened. We will endeavour to update our communities as soon as we are able, she said.

Liverpool Women's Hospital said visiting access had been restricted until further notice and patients had been diverted to other hospitals where possible. The hospital receives around 50,000 patients annually as one of the largest hospitals of its kind in Europe.