Travis Scott and Drake are being sued for “inciting mayhem” 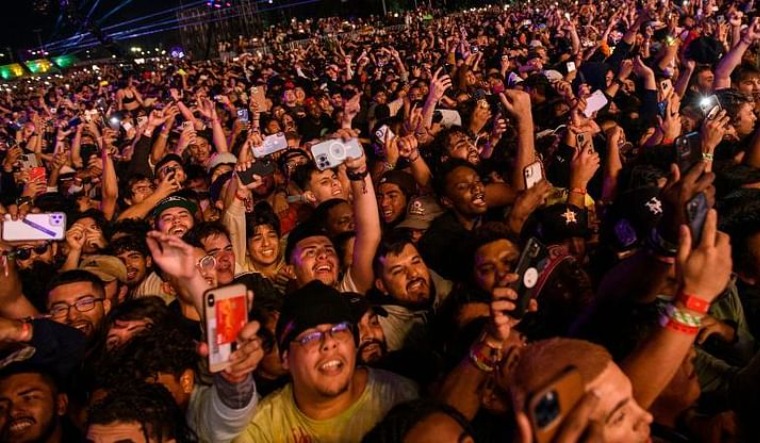 The crowd watches as Travis Scott performs at Astroworld Festival at NRG park on Nov. 5, 2021 in Houston | AP

A Texas law firm on Sunday revealed that rappers Travis Scott and Drake are being sued for “inciting mayhem” after eight people were killed and others were injured in a crush at a Texas event. Kristian Paredes, a 23-year-old concert-goer, is the plaintiff. He was one of the "severely injured" at the concert on November 5th. Around 50,000 people were in the audience at NRG Park in Houston when the mob began pushing toward the stage as Scott was playing, causing chaos. A well-known attorney, Ben Crump, also stated that he has filed a lawsuit against Scott and Astroworld.

Crump and co-counsel Bob Hilliard filed suit Sunday on behalf of 21-year-old concertgoer Noah Gutierrez, who described “a scene of chaos and desperation”.

The lawyers said they expected to file suit on behalf of other concertgoers during the week.

“We are hearing horrific accounts of the terror and helplessness people experienced -- the horror of a crushing crowd and the awful trauma of watching people die while trying unsuccessfully to save them,” Crump and Hilliard told AFP.

A popular sold-out music festival in Texas turned into a "mass casualty" incident and left at least eight people dead and scores of others injured when a crowd surged towards the front stage, squeezing audience members who had nowhere to escape at the event attended by some 50,000 fans of American rapper Travis Scott.

Scott released his first statement on Friday’s incident via his verified Twitter account on Saturday. “I’m absolutely devastated by what took place last night. My prayers go out to the families and all those impacted by what happened at Astroworld Festival. Houston PD has my total support as they continue to look into the tragic loss of life.” “I am committed to working together with the Houston community to heal and support the families in need. Thank you to Houston PD, Fire Department and NRG Park for their immediate response and support,” Scott wrote. "Our hearts are broken," Lina Hidalgo, the Harris County judge, said.

Multiple fans were trampled as hundreds rushed the event’s perimeter. Once inside, some people began climbing onto portable toilets as security personnel worked to try and contain the crowd, ABC 13 news website reported. Hundreds have been injured on the opening night of the popular weekend music festival, authorities said.

Concert-goers reportedly asked staff for help, but, were ignored.

Governor Greg Abbott in a statement issued on Saturday said, "What happened at Astroworld Festival last night was tragic, and our hearts are with those who lost their lives and those who were injured in the terrifying crowd surge.”

Organised by rapper Scott, the third annual festival featuring multiple acts was scheduled to run from Friday to Saturday.

Organisers called the event off early. According to Houston Police Chief Troy Finner, the organisers, rapper Scott and LiveNation, called a halt to the event when it became clear that numerous people had been injured.

Medical transports had already arrived at the park for the multi-day celebration, but officials said the personnel was immediately overwhelmed with injured people.

Since its inception in 2018, the Astroworld festival has grown in scope and the range of artists performing. The 2019 concert included genres such as reggaeton and hard rock and included artists such as Pharrell Williams and Megan Thee Stallion, a Reuters report read.

"It was the crowd control at the point of the stage that was the issue, especially as the crowd began to surge toward the stage," Pena told abc7chicago.com.

The event was cancelled about 40 minutes after attendees reportedly started ‘going down’. Concert-goers said that several barricades raised near the stage area and separating different sections of ticket holders prevented people from escaping.

What caused the crowd to move towards the stage, remains unknown. Attendees told the New Your Times that the event was chaotic right from the beginning and a lot of mob mentality was going on. Reportedly, as some in the crowds pleaded for help, others were unaware that there were any serious problems. The rapper reportedly didn’t halt the show soon enough, despite noticing an ambulance among the crowd.