COP26: As pressure mounted, India made its stand and ambitions clear

Modi called on the global north to raise climate financing 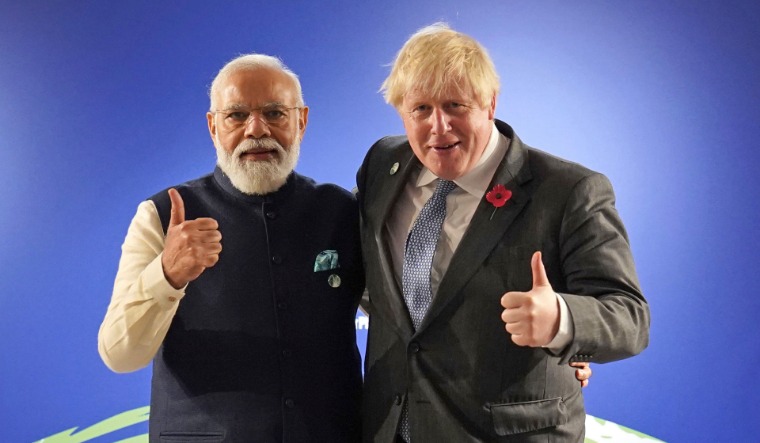 The target has shifted, clearly. It is 1.5ºC now, no longer the Paris-agreed limit of keeping temperature rise at 2ºC below the pre-industrialised normal.

The proclamations by both the western states as well as the island nations made this clear. Whether it was the United Nations general secretary Antonio Guterres, or the UK's most celebrated environmentalist David Attenborough, or Barbados prime minister Mia Mottley, they all say that the temperature rise has to be kept at 1.5ºC to survive.

This pressure from two ends, the developed west and vulnerable island nations, has come on countries like India, which had insisted that the Paris ambition should be met first, and not prematurely revised.

However, the recently released inter-government Panel on Climate Change report has been a wake-up call. It said that the level of Paris commitments still would take the world towards a 2.7ºC rise, and emphasised the need for a 1.5ºC target, noting that adaptations would be easier within this rise.

This was why India spelt out its ambitions clearly. These ambitions, the most important being a timeline for attaining net-zero emissions by 2070, are not quite different from what India has already committed to.

The Indian Railways, for instance, has been working towards renewable powering for some time now. It is a mega institution, transporting more than the globe's entire population every year, as Modi pointed out. Getting this leviathan to power on renewables alone by 2030 will cut down 60 million tonnes of emitted carbon, more than the emissions of several small countries.

Modi made a slew of announcements—making the economy 45 per cent less intensive by 2030 and having a 50 per cent renewable component in the energy mix by the same year. These goals, too, are not really new. Existing projects, like the solar mission, are gearing towards them.

Giving a commitment towards net zero emissions, however, was important to keep India's development partners happy. It is an important issue for Boris Johnson, who, though not regarded as any climate champion back home, has taken to the issue passionately in recent times.

India and the UK have devised intensive partnerships, among them the Coalition for Disaster Resilient Infrastructure. On November 2, CDRI, along with the Small Island Developing States (SIDS), launched IRIS or Infrastructure for Resilient Island States, an adaptation initiative to combat climate events. The UK is committed to putting in both money and tech into this initiative.

Though two decades behind their deadline, India's announcement was met with positive reactions by the UK government. The 2070 deadline is in the far future, and as observers point out, who among us will be here to see the commitments met, either 30 or 50 years down the line. Not any of the present world leaders, anyway. Even the youth of today will be cynical or jaded middle-aged people by then.

Although energy has been the centre stage of speeches at COP26, the opening days have also seen action on the traditional issues of the environment. Around 100 countries have committed to the deforestation deal which aims to stop and reverse deforestation by 2030.

With Indonesia, Russia and many African nations on board, the deal carries the promise of nearly $20 billion of public and private financing. Another initiative, the Africa Green Finance Coalition, is being launched to spur investment into the continent's transformational economy, while the Climate Finance Action Network was launched for Pacific nations.

Climate financing has become a sticky issue, with country after country reminding the developed world of the $100 billion a year commitment they made way back in Copenhagen in 2009. Sheikh Haseena of Bangladesh pointed out how adaptation actions were not effective in the absence of these promised funds. The issue was also raised by Abdulla Shahid, president of the United Nations 76th General Assembly. Shahid, from Maldives, knows too well how the absence of money can make island nations vulnerable to climate events.

Modi went a step ahead, calling out the Global North to up the climate financing ambition. He said that if there was a call to raise climate ambition, then climate finances, too, needed a raise. The issue of these unmet funds has not yet brought embarrassment to the faces of Western leaders, but they have begun accepting that the money will be a matter of trust in their commitment.

US President Joe Biden said his country was planning to quadruple green finance funding (to meet the $100 billion pledge). French President Emmanuel Macron called the fund delivery the second main objective of this summit (after getting the major polluters to cut down on emissions). He said leadership demanded being exemplar, and the developed world needed to raise its financial contribution. France has raised its financing to $7 billion a year. Prince Charles emphasised the need to pump in more private capital into climate action.

The leaders sat together for another day of initiatives, like the US spearheaded Buid Back Better round table and the Global Green Grids initiated by Johnson and Modi, to connect solar power transnationally. Once however, they notch up several thousands of air miles and return home, how much of these pledges—of action and finance—get translated?

God save the planet, said Biden. Will it come to that point, or will humans do their bit? “If we are powerful enough to destabilise the planet, surely we can join to save it,” Attenborough said.