TLP workers are marching on Islamabad, demanding release of their leader 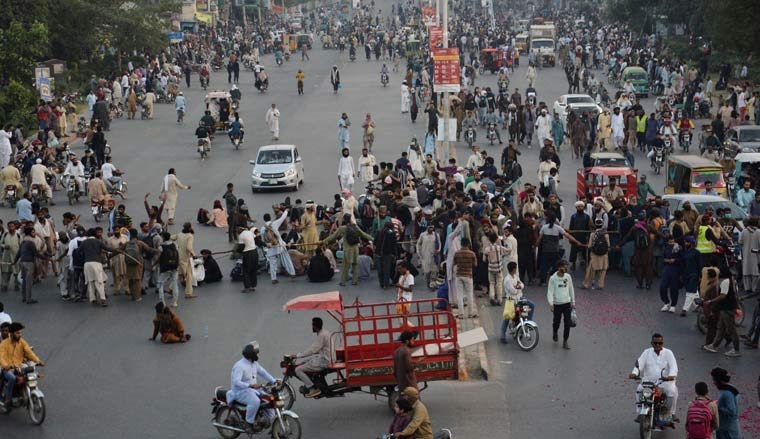 Security officials in Pakistan are shocked after it emerged that members of the banned Tehreek-i-Labbaik Pakistan party reportedly used sub-machine guns (SMGs) against policemen during anti-government protests, prompting the authorities to conclude that the hardline Islamists had been turned into a "militant group", a media report said on Saturday.

Mobile phone footage, which showed members of the party firing 80 rounds of SMGs at policemen in Kamoke, in Pakistan's Punjab province, on Thursday, was presented during a high-level security meeting, the Dawn newspaper reported.

Other incidents of attacks were also recorded, which showed two policemen succumbing to bullet wounds, while 16 others sustaining injuries from the shots fired by TLP members, the report said.

It has shocked police high-ups from where the TLP was getting weapons and training to use them, the police official was quoted as saying by the newspaper.

He added that all participants of the high-level security meeting had reached the conclusion that the TLP had been turned into a militant group' and the government must review its policy seriously towards this outfit, the report said.

On Saturday, thousands of TLP workers were camped in Wazirabad, after talks between the government and the party leadership remained inconclusive, the Express Tribune reported.

Meanwhile, Minister of Religious Affairs and Interfaith Harmony Pir Noor-ul-Haq Qadri said on Saturday that a 12-member panel was formed to act as a negotiator between the Pakistan government and TLP, according to a report in Geo News.

The minister said religious leaders from across the country met Prime Minister Imran Khan and expressed their resolve to solve the issue peacefully, the report said.

Last week, the TLP workers had launched a rally from Lahore to Islamabad demanding that the Pakistan government release their leader Saad Rizvi, who was arrested last year for demonstrations against France after a French magazine published caricatures of Prophet Muhammad, and expel the French ambassador.