Pakistan: 4 policemen among 8 dead in clashes with radical Islamist party 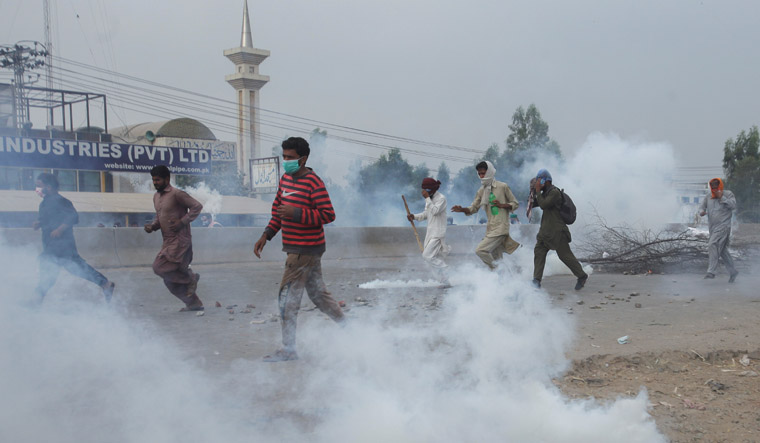 At least four policemen were among eight persons killed on Wednesday in fresh clashes between supporters of a radical Islamist party and police in Pakistan's Punjab, prompting the Imran Khan government to deploy Rangers in the province for two months to deal with the protesters.

Interior Minister Sheikh Rashid Ahmed said that the Rangers were being called in to maintain law and order in Punjab for 60 days following renewed clashes between police and the banned Tehreek-i-Labbaik Pakistan (TLP), which started march towards Islamabad after the government announced that it "cannot meet the TLP's demand for expulsion of the French ambassador".

According to a notification issued by the interior ministry, 'Rangers have been deployed in Punjab. The powers have been entrusted to Rangers in terms of section 4(3)(1) of Anti-Terrorism Act 1997within Punjab to prevent the commission of terrorist acts and scheduled offences under ATA 1997 execute powers of police officers provided in the code of criminal procedure."

The development comes as fresh clashes between police and TLP supporters near Sadhoke in Punjab's Gujranwala district, killed at least four policemen and injured over 263 others.

"Four of our policemen have died, while 263 have sustained injuries after members of the banned organisation opened fire on the forces during their protest," Inspector General Punjab Rao Sardar Ali Khan told reporters. "We won't let this gang get away with its actions."

TLP office-bearer Ibne-I-Ismail told PTI that at least four of its workers were killed from the direct firing of the police. He also claimed that firing was also made on the protesters from a helicopter.

"Police did a massive shelling and also threw drums of acid on road to stop Ashiqaan-e-Rasool (lovers of the Prophet) to proceed to Islamabad, Ismail said and warned the government that thousands of TLP workers will sacrifice their lives but will not budge from their demands.

The clashes between the Islamists and police started at Sadhoke, some 50 kms from Lahore, when thousands of the TLP protesters who had been camping between Muridke and Gujranwala along the GT Road for the last three days started the march towards Islamabad after getting a go-ahead from their leadership.

He said cellphone and internet services have been suspended from Muridke to Gujranwala areas of Punjab. A fresh batch of 10,000 policemen has been called from Lahore to stop the protesters from heading towards Islamabad, he added.

TLP's founder late Khadim Rizvi's son Saad Rizvi has been detained by the Punjab government since April last under the maintenance of 'public order' (MPO) following the party's protest against the blasphemous caricatures of Islam's Prophet published in France and its demand that the French ambassador be sent back and import of goods from that country be banned.

The TLP had given a two-day deadline on Sunday to the government to meet its demands to release the party chief Saad Rizvi and expel the French envoy or face a sit-in in the capital.

"The TLP has turned into a militant organisation as its members had opened fire on policemen using Kalashnikovs," he said.

"The TLP is banned in Pakistan and now it is feared that it may be banned internationally too," he said, adding that Pakistan won't be able to intervene if such a thing happens.

The minister said that the government tried holding talks with the proscribed organisation and kept its word, but "the TLP broke its promises."

Earlier, Information Minister Fawad Chaudhry said that the TLP will not be allowed to challenge the writ of the state and will be treated as a "militant" group and not a religious party.

The death toll has risen to 18  11 TLP workers and 7 policemen  since the clashes broke out between the TLP and police over a week ago.

A couple of days ago, the government had freed 350 TLP activists to placate the radical group.