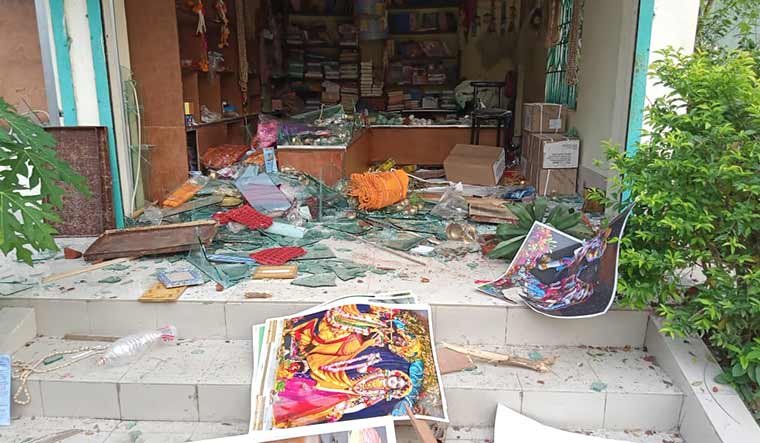 An ISKCON temple that was attacked by a mob on Saturday in Noakhali, Bangladesh | ISKCON Twitter

Following an attack on an ISKCON temple in Noakhali, Bangladesh, the body of a 20-year-old Hindu man was found at a pond next to the temple, a day after the country's Prime Minister Sheikh Hasina warned that those who attacked Hindu temples would be hunted down.

ISKCON released a statement urging the Bangladesh government to take action. "It is with great grief that we share the news of a ISKCON member, Partha Das, who was brutally killed yesterday by a mob of over 200 people. His body was found in a pond next to the temple. We call on the Govt of Bangladesh for immediate action in this regard," ISKCON said.

We call on the Govt of Bangladesh to ensure the safety of all Hindus & bring the perpetrators to justice. pic.twitter.com/ZpHtB48lZi

The attack is the latest in a spree of incidents that have taken place in the final days of Durga Puja. An incident where a Quran was allegedly desecrated in Cumilla was followed by a series of attacks on Hindu temples and on Durga Puja pandals across Bangladesh.

A clash between a mob and police in Hajiganj left 4 dead and nearly two dozen injured on Wednesday including 15 police officers. Police opened fire on a mob of over 500 people during the unrest.

On Thursday, Hasina warned that those who attacked temples would be "hunted down and punished".

Authorities overnight imposed a nationwide security vigil while officials said that initial investigations have thrown up crucial evidence against the perpetrators of violence against the minority Hindu community's Durga Puja.

The paramilitary Border Guard Bangladesh (BGB) has expanded the vigil from 22 to 34 out of 64 administrative districts.

The elite anti-crime Rapid Action Battalion (RAB) said it expects to arrest some of the key perpetrators of the sporadic violence which took place in the past three days.

With the latest killing, the death toll during the Durga Puja celebrations across the country has reached five.