Win or lose in Philippines, Manny Pacquiao is the boxing G.O.A.T. And not for the reasons you think

Manny Pacquiao is Nikola Tesla. He is Kurt Cobain. And he is Arthur Rimbaud 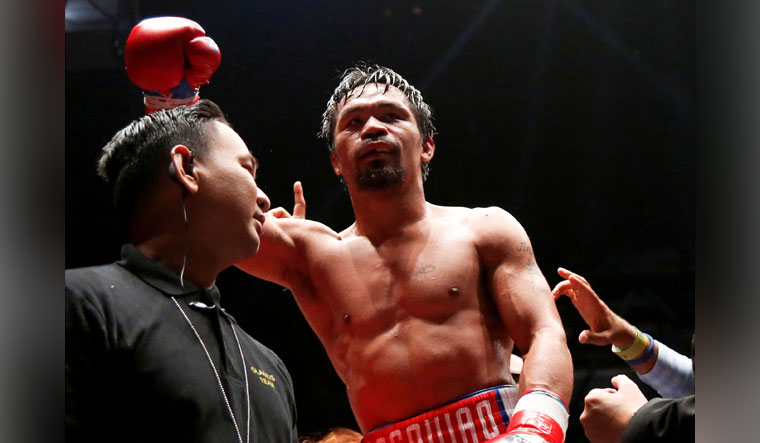 In September 2008, ahead of the much-anticipated welterweight boxing bout between Manny Pacquiao and ‘Golden Boy’ Oscar De La Hoya, Philippines—where the former hailed from—was in uproar. Reports emerged that the national Games and Amusements Board (GAB) had written to the Nevada State Athletic Commission, asking for the clash to be cancelled. Their reasoning went thus: The odds were stacked too much in De La Hoya’s favour. Pacquiao was 5’6; De La Hoya was 5’10. Pacquiao’s heaviest fight thus far was at 135 pounds, where he knocked out David Diaz for the lightweight title; De La Hoya had just come off a 150-pound bout. The fight was set at 147 pounds.

GAB chairman Eric Buhain, while denying allegations that he had written to the Nevada Commission, expressed concern about Pacquiao’s safety and advised him to step away from the fight. Much of the public sentiment was along Buhain’s lines. Pacquiao had done well so far, but he did not stand a snowball’s chance in hell against De La Hoya. There were even concerns that the diminutive Filipino could suffer some serious physical damage in such a jump up in weight classes.

What happened on December 6, on the day of the fight, was the essential Manny Pacquiao experience. De La Hoya was as helpless as a rabbit in the jaws of a jaguar, unable to shake off his smaller opponent who shadowed him across the ring, tormenting him every inch of the way. De La Hoya was flummoxed—he desperately tried to time Pacquiao and deny him reach, but the Filipino was far too quick, bobbing and weaving and dancing across the ring in flashes of red. De La Hoya was dismantled systematically until his corner threw in the towel at the end of the eighth round; he found joy only in odd moments when he managed to get Pacquiao on the ropes, otherwise looking bemused at the barrage of quicksilver counters, wracking body shots and overhand lefts that were right on the money. De La Hoya, at 35, announced his retirement after the fight. For Pacquiao, the rest was history.

Why Manny Pacquiao? This is a question I have struggled with for far too long, especially in the week that he announced his retirement from the beautiful sport. Pacquiao had announced that he will be running against incumbent president Rodrigo Duterte in the Philippines presidential elections. So why do I hold the Pac Man in the G.O.A.T. pedestal, when the non-emotional part of my brain is screaming out to me to reconsider this choice (along with a lot of other life choices). Sure, Pacquiao has a legitimate claim to the throne. After all, the southpaw is the only boxer in history to win world titles in eight different weight classes, the sole name in the list of fighters who has held world titles in four different decades, and the oldest welterweight champion in history; he beat Keith Thurman in 2019 to accomplish the feat. But there are other names too. Inevitable names that, no matter what your tribal affiliations, you had to doff your hat to—Muhammad Ali the generational sensation, Sugar Ray Robinson with his monstrous 85-0 record, Joe Louis, or even a left-field candidate like Duran. In such an illustrious list, why does Pacquiao outrank everyone else in my mind to the level that he does? Reaching a logical conclusion is difficult. But nothing about Manny Pacquiao was logical or straightforward.

Born in Kibawe in desperate poverty, in Pacquiao’s retellings, there were not even enough food for the family on most days. He dropped out of school to focus on boxing, moving on to an uncle’s home in General Santos where his first experience with fights were street kerfuffles where the winner would be awarded 100 pesos. He stowed away on a boat to the nation’s capital of Manila, where he did odd jobs and turned professional boxer, garnering some degree of fame across the country. At the age of 19, he tasted his first title victory. He beat Chatchai Sasakul in Thailand to win the WBC flyweight title. Pacquiao’s exceptional speed and signature aggression were on full display in that fight, but so was some of his rougher technical edges that got him into tight spots. He soon joined hands with coach Freddie Roach, who runs the now-iconic Wild Card gym in Los Angeles. Under Roach, Pacquiao managed to temper his fierce aggression with a staid ring intelligence, massively upgraded his technical repertoire, and balanced his lethal left hand with a powerful right.

In 2003, Pacquiao scripted the first major upset in a career of many. He beat an overwhelming favourite in Marco Antonio Barrera in featherweight category, bouncing back up from a knockdown in the very first round to score a TKO in the 11th. The fight showed the first glimpses of what Manny Pacquiao would evolve into in the future—a quadruple threat, a zero-friction, high-volume puncher with sublime speed, exceptional technical prowess, an endurance that was second to none, and the knockout strength to go with it. He turned his disadvantage, his lack of height, into a strength. His aggression remained a mainstay, but completely controlled. His low centre of gravity rendered him with a balance that he combined with high-level agility to a lethal combination that sometimes ripped apart the most traditional boxing axioms. Try to deny him reach? No problem. He will wait for your jab and then unravel you with one rapid counterpunch and dart into range, or slowly manipulate his way, with his favourite overhand left or quickfire changes in elevation, into the pockets; once he is inside, he will go on a lightning blur of strikes that most fighters would find hard-pressed to deal with. The only way out was to weather the storm. If you could, that is. Trying to time his movements? Good luck with that.

After Barrera, he would go on to beat Erik Morales over a trilogy of fights, terrorise Juan Manuel Marquez (who was humiliated with a triple knockdown by Pacquiao in the first round of the first fight, and who had to wait until their fourth bout to finally get one over his nemesis), beat Barrera in a rematch, and score wins over Miguel Cotto, Ricky Hatton, Antonio Margarito, Joshua Clottey and Shane Mosley to name a few.

At the fag end of his career, he fought and lost against Floyd Mayweather, beat Thurman for the welterweight title and bid farewell to the sport in style, at the ripe old age of 42, with a bout against highly touted Yordenis Ugas in August. Additionally, no matter how high he rose in his sport, Pacquiao never forgot his roots. He has spent millions feeding and saving and in relief works in his home nation, and the love of the Filipino public to their Chosen One is palpable. He exited the sport the exact way he came in—Pacquiao chose the toughest opponent till the last possible moment, never going the way of his some of his illustrious counterparts who debased the sport with silly celebrity and YouTuber spectacles for clout and a quick payday.

And there lies the crux of my argument to the question ‘Why Pacquiao?’ Some of my reasons are purely subjective. Pacquiao gave out the false illusion of attainable talent—every young boxer at point of time or another strived to copy at least one of Pacquiao’s signature moves, and the bane of boxing gyms was that one kid who wouldn’t stop trying the 13-punch Pacquiao combo on the heavy bag, proper form and movement be damned. There was something strangely relatable about Pacquiao—cutting across cultures and geographies—which most other boxers (genetic freaks of nature like Mike Tyson) couldn’t project.

In Pacquiao, there is what I always like to call the Tesla Effect. After all, there is no particular logical reason as to why a whole internet generation has grown up idolising inventor Nikola Tesla and, at the same time, trashing with religious fervour the character and the works of his arch-nemesis Thomas Alva Edison. Sure, Tesla’s Alternating Current (AC) did ultimately win the ‘War of Currents’, but Edison was not some bum on the streets; he was a generational intellectual heavyweight who invented items as crucial to our existence as the lightbulb and the moving picture. Purely in terms of stats (as the youngsters nowadays like to say), Tesla was nowhere close to Edison—the latter had multiple times more patents in his lifetime than Tesla did. So then, why Tesla? There was something innately pure about Tesla’s tortured genius, an incandescent soul who envisioned technologies generations ahead of his time, a man full of “Magic” and mysteries, a man fighting to preserve something pristine, and driven by a holy intent that we all could almost grasp, yet bewitchingly not fully so. Tesla was Pacquiao. And they were Kurt Cobain. And Arthur Rimbaud. Canonised for something far beyond their output. Something that is hard to be quantified. Hidden slivers of sublimity that only art at its most rarefied heights can produce. They were Magic. Just as Pacquiao was Magic, weaving intricate silhouettes on a square-shaped canvas with his bobs and weaves, and slips and darts. As broadcaster Sev Sarmenta eulogised to ESPN, there was no crime in Manila on Sunday because everything freezes and everybody was busy watching Manny Pacquiao.