US Marines are, reportedly, working with local maritime forces on small-boat training 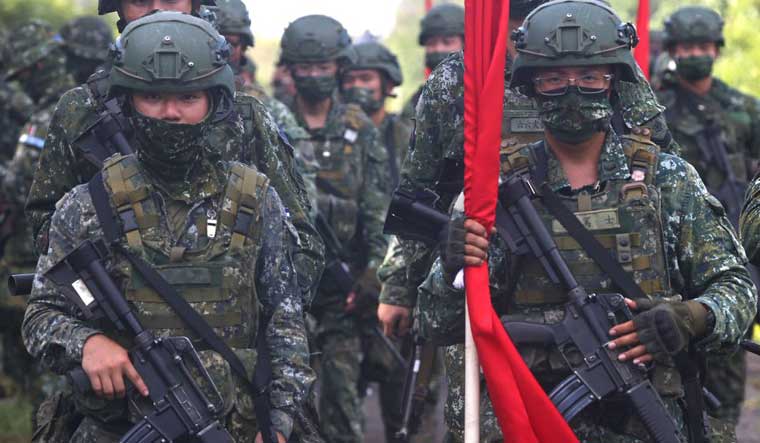 Temperatures across the Taiwan Straits have been high for more than a week as China has continued to launch fighter aircraft and bombers on overflight missions near the island nation.

On Wednesday, Taiwan's Defence Minister Chiu Kuo-Cheng warned China would be in a position to launch a full-scale invasion by 2025.

On Thursday, The Wall Street Journal reported units of US special forces and a contingent of marines have been operating secretly to train Taiwan's military to shore up defences for "at least a year".

The officials quoted in the story said the US personnel in Taiwan were sent on a rotation basis.

Explaining the significance of the development, The Wall Street Journal noted, "Asian media reports last year suggesting a possible U.S. Marine deployment in Taiwan were never confirmed by U.S. officials. The presence of U.S. special operations forces hasn’t been previously reported. The special-operations unit and the Marine contingent are a small but symbolic effort by the U.S. to increase Taipei’s confidence in building its defenses against potential Chinese aggression."

A former official of the previous Donald Trump administration argued Taiwan had neglected to buy "cheaper but lethal systems" to deter China. Matt Pottinger told The Wall Street Journal "Taiwan badly neglected its national defense for the first 15 years or so of this century, buying too much expensive equipment that will get destroyed in the first hours of a conflict, and too little in the way of cheaper but lethal systems—antiship missiles, smart sea mines and well-trained reserve and auxiliary forces—that could seriously complicate Beijing’s war plans."

Pottinger served as deputy national security adviser during the Trump administration. He is a distinguished visiting fellow at the Hoover Institution.

A Pentagon spokesperson John Supple was quoted by The Guardian as saying, "our support for and defense relationship with Taiwan remains aligned against the current threat”.

Not surprisingly, Chinese state media have reacted with anger to the report. Hu Xijin, the editor in chief of Global Times, tweeted the Chinese military could launch a air strike to eliminate "US invaders".

Hu tweeted, "Why just two dozen members? Why secretly? The US should send 240 servicemen publicly, in US military uniform, and make public where they are stationed. See whether the PLA will launch a targeted air strike to eliminate those US invaders!"

In August, a US senator tweeted the US had 30,000 troops in Taiwan. John Cornyn was forced to delete the tweet as it provoked outrage. Chinese state media then claimed the country would "immediately launch a war to eliminate and expel U.S. Soldiers".