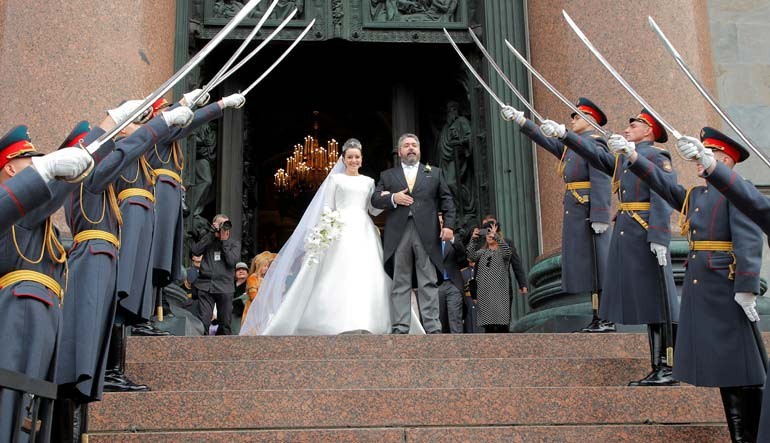 Romanov, a descendant of Russia’s last emperor Nicholas II, chose the former imperial capital for their wedding as it was the first palace in Russia that his family returned to following the collapse of the Soviet regime that ended the reign of his ancestors.

Nicholas II, Russia's last Tsar, was murdered along with his wife and five children by a Bolshevik firing squad in 1918.

Bettarini converted to Orthodox Christianity in 2020 and was christened Viktoria Romanovna in July that year. Their marriage was officially registered at a Moscow registry office in late September. But, Friday’s event was a far more royal affair—the wedding took place in the presence of several hundred guests from Russia and abroad, according to fontanka.ru.

Bettarini wore a tiara designed by Chaumet, the official jeweller to Empress Joséphine and Napoléon Bonaparte.

Georgy Mikhailovich is a son and an heir of the Russian Imperial House head Grand Duchess Maria Vladimirovna of Russia, the only child of Vladimir Kirillovich Romanov and Duchess Leonida Georgiyevna Bagration of Mukhrani. In 1992, following the death of Vladimir Kirillovich (who had headed the Russian Imperial Family since 1938), Maria Vladimirovna staked her claim to succeed him as head of the Russian Imperial Family by virtue of being a direct descent of Alexander II—a claim that has been challenged by those who trace lineage to Emperor Nicholas I’s grandson, Grand Duke Nikolay Nikolayevich.