Quad summit focuses on outreach to Indo-Pacific with deliverable outcomes 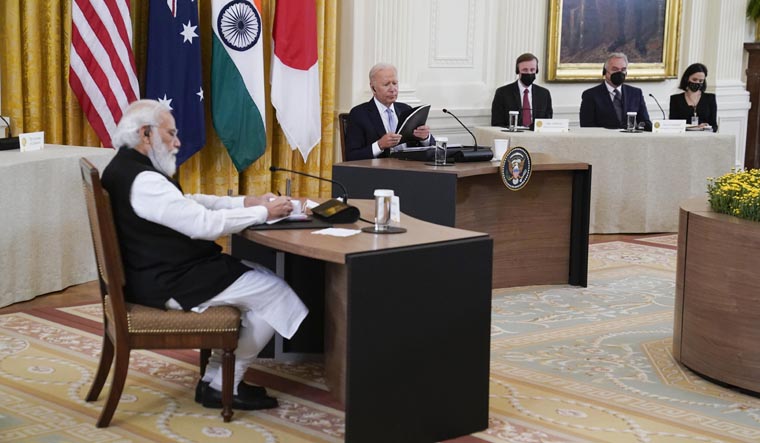 The fact sheet of the first in person summit of the Quadrilateral Security Dialogue talks about cooperation and building new infrastructure in areas of rural development, water supply and health and road infrastructure, working together to tackle the challenges of climate change and critical and emerging technologies and cybersecurity. As Prime Minister Narendra Modi emphasised, the Quad will act as a force for global good and work towards ensuring peace and security in the Indo Pacific and the entire world. With 100 Quad fellowships thrown in for post graduate research in STEM (Science, Technology, Engineering Medicine) subjects, and a focus on people to people connect, Quad has made huge attempts to put forwardsa benign front.

Who, after all, can find reason to complain over planning initiatives like setting up a climate and information services task force, a clean hydrogen partnership, a “build back better health security'' network to prepare for the next pandemic and even a green shipping network?

Sources on the Indian delegation said the summit was structured around four themes--Afghanistan and regional security, Covid-19 response, tech and cyber security and climate. Modi was the lead speaker for the themes on tech and cyber security. India's decision to resume vaccine exports from October was welcomed. India also told the summit that Biological E would be producing one million doses of Janssen vaccine from October, with the country financing half of the first consignment. Foreign secretary Harshvardhan Shringla called the vaccine partnership and Covid-19 pandemic [recovery] as the most important of the Quad deliverables.

The joint statement notes that the Quad summit was an opportunity to refocus on the Indo-Pacific and that they were committed to promoting free, open, rules based order rooted in international law and undaunted by coercion to bolster security and prosperity in the region and beyond. They launched the Quad Principles on Technology Design, Development, Governance and Use that will guide the region and the world towards “responsible, open, high standards innovation”. Quad launched a new cooperation on cyber space and outer space to share satellite data for monitoring climate change, disaster response and preparedness and sustainable use of outer space.

Although it is in name a security dialogue, the summit pointedly kept away from even using the word “military'' except once, and that was in connection with denying military aid to terror groups in Afghanistan. The steering away from military mentions was very deliberate. This, despite the Malabar exercise having become a Quad Naval exercise, now. In fact the only security they elaborated upon was health and climate and cyber security. They mentioned their commitment to work towards denuclearisation of North Korea. They  committed themselves to deepening their involvement in Afghanistan regarding counter terrorism and humanitarian cooperation and denounced the use of terrorist proxies and emphasized the importance of denying any logistical financial or military support to terrorist groups which could be used to launch or plan terror attacks, including cross border attacks.

This last bit is clearly crafted by India, and it has got the Quad to agree that there are concerns that the new situation in Afghanistan could be exploited by Pakistan for launching terror attacks into India. Shringla said that “we are looking at a fairly strong language with regard to the Quad's commitment on terrorism and the need for counter terrorism anywhere in the world.” He noted that with regard to Afghanistan the language was similar.

However, in a lot of the fact sheet on Quad as well as the joint statement, there is enough for China to munch upon. The thrust on freedom of navigation is clearly a counter to China's growing footprint on the Indo-Pacific. The focus on benignly checking China's influence, however, is a clear takeaway from the summit. Take for instance the launch of the Quad Infrastructure Coordination Group to cater to the significant infrastructure demand in the region. With the Chinese Belt and Road Initiative and numerous other projects it has to develop and operate ports and other such key infrastructure projects in the region, Quad is creating a robust alternative. One that India alone could never have dreamed of providing.

The formation of a green shipping network with ports of Los Angeles, Mumbai, Sydney and Yokohama creating the borders of a zone that Quad seeks to develop into a green and decarbonised shipping value chain is again an initiative at providing alternatives in the region. “The Quad Shipping Task Force will organise its work around several lines of efforts and aims to establish two or three Quad low emission or zero emission shipping corridors by 2030,'' says the fact sheet. The decision to support 5G deployment and diversification is also significant given the Chinese domination in this area.

Shringla said that the real focus of Quad is to see how we can work with other like-minded countries in the region. Democracy was an important factor binding them, he said. Which, again, is significant.

He said that that in future, there would be more meetings of Quad at various levels and pointed deliverables. He said that the leaders are committed to ensuring that Quad “has a certain level of outreach to the Indo-Pacific region”. He said Quad was serious about what it is doing and that the members have a certain focus that is very concentrated on outcomes.