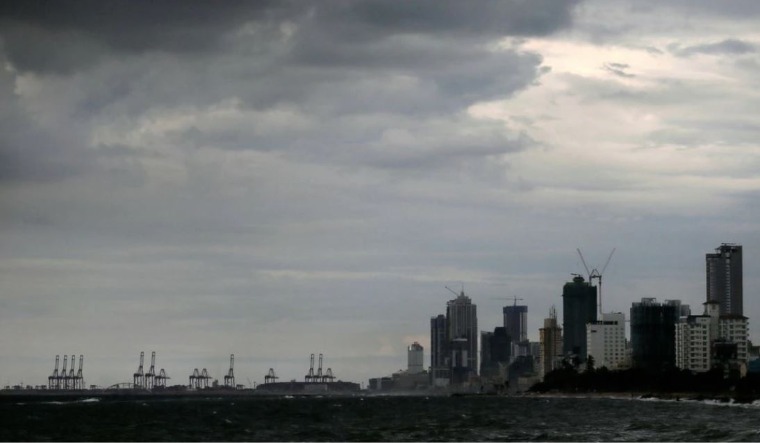 A general view of the main business district as rain clouds gather above in Colombo, Sri Lanka | Reuters

As rating agencies slashed their estimates for Sri Lanka, food lines formed across the country, and a balance of payments crisis threatened to implode the economy, Sri Lanka’s government officials denied the existence of a food crisis in the country.

On September 10, State Minister of Money and Capital Market and State Enterprise Reforms, Ajith Nivard Cabraal told the BBC that there was no food crisis in Sri Lanka to come out from. "Like other countries of the world, Sri Lanka too faces challenges. They can be overcome through prudent policies. The country's economic growth rate this year will be 4.5 per cent", Cabraal was quoted as saying.

Today, Cabraal handed in his resignation, a day before the governor of Sri Lanka’s central bank was also due to resign. According to a Bloomberg report, Cabraal is now set to take over from W.D. Lakshman—making this his second stint as governor of the Central Bank of Sri Lanka. Cabraal will now face a plethora of problems.

Weeks prior, Sri Lankan President Gotabaya Rajapaksa on August 31 declared an economic emergency to contain soaring inflation after a steep fall in the value of the country's currency caused a spike in food prices, granting powers to the military to prevent hoarding and control the supply of essential goods.

Throughout all this, the Delta variant of the coronavirus rampages through the country, with the third week of its lockdown due to end today.

What is happening with Sri Lanka's economy?

Sri Lanka faces a severe crunch in its foreign exchange reserves, with only enough dollars to cover less than two months of imports. By the end of July, Sri Lanka had just $2.36 billion worth of forex, compared to $6.93 billion in August 2020. The Sri Lankan rupee has fallen by 7.5 per cent against the US dollar this year. The Central Bank of Sri Lanka recently increased interest rates in a bid to shore up the local currency—becoming the first central bank in Asia to tighten its monetary policies post the pandemic.

This, even as the country faces the prospect of repaying $1.5 billion of foreign bond payments in January and July. These payments are in part responsible for the crisis: In July, Sri Lanka paid off a $1 billion debt repayment from its foreign exchange reserves.

While Sri Lanka has long borrowed to cover the cost of development, it has for most of its history enjoyed low-interest concessionary loans. But, when Sri Lanka became a middle-income country, it started having to rely on alternative financing sources.

As a story in The Diplomat noted in February, by the end of 2019, 56 per cent of Sri Lanka’s foreign loans were commercial borrowings, mostly of International Sovereign bonds.

In a bid to stem the tide, Sri Lanka received 554.8 special drawing rights (about $800 million) from the International Monetary Fund. In addition, Sri Lanka’s central bank received $150 million via a currency swap agreement from Bangladesh.

The impact of the balance of payments crisis has translated into rising prices of commodities like sugar, rice, onions and potatoes, while long queues have formed outside stores because of shortages of milk powder, kerosene oil and cooking gas. While imposing rules against hoarding, the government has denied any food shortages. The wide-ranging measure is also aimed at recovering credit owed to state banks by importers.

In recent weeks, the prices of most essential goods have been skyrocketing due to the falling local currency and high global market prices driven by the COVID-19 pandemic. The government blames traders for hoarding.

There are other factors too: A dip in tourism—which accounts for over 10 per cent of Sri Lanka’s GDP—has also hurt the local economy. Tourism was the third-largest contributor to foreign exchange. Interestingly, the dip in tourism took place before COVID-19: 2019 saw tourist footfalls drop by 18 per cent, the first dip after roughly a decade’s worth of consistent growth.

The UN rights body on Monday expressed concern on the state of economic emergency declared in Sri Lanka amid deepening recession and noted that it may "further expand the role of the military in civilian functions" in the island nation.

"A new state of emergency was declared in Sri Lanka on August 30 with the stated aim of ensuring food security and price controls, amid deepening recession. The emergency regulations are very broad and may further expand the role of the military in civilian functions," she said, adding that her office will closely monitor their application.