Moise was shot, at his home in Port-au-Prince on July 7 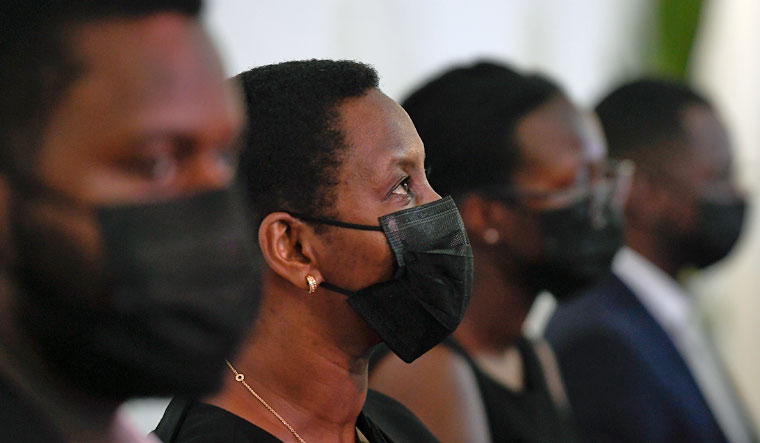 Haiti's assassinated president Jovenel Moise will be laid to rest on Friday. A memorial service was held in honour of the president on Thursday. Moise supporters kept interrupting Reverend Jean-Gilles Sem. while he was speaking at the mass. The memorial service was attended by Marine Moise, Jovenel Moise's wife. Several of the attendees were wearing t-shirts emblazoned with pictures of Jovenel Moise. Martine Moise on Twitter said that the family would like to pay for the president's funeral rather than take money from Haiti's said the family wished to pay for the ceremony itself rather than use funds from Haiti’s public treasury.

She also posted an image of her from the hospital in Miami, where she was taken to after the shooting and wrote, “Thank you for the team of guardian angels who helped me through this terrible time. With your gentle touch, kindness and care, I was able to hold on. Thank you! Thank you! Thank you!”

The Reverend said that “the killings and kidnappings should stop.” Moise was shot, at his home in Port-au-Prince on July 7. Thursday saw demonstrations near the hometown of Jovenel Moise. One man was shot in the community of Quartier-Morin, which is near Trou-du-Nord, where Moïse was born.

The Caribbean nation, which was already struggling with poverty and lawlessness, plunged into a further state of turmoil after Moise's assassination. Interim prime minister Claude Joseph, on July 18 said he will step down and cede power to Ariel Henry, the neurosurgeon Jovenel Moise nominated to be prime minister a day before his death.

Angry supporters of Jovenel Moise laboured into the night on Thursday to finish a makeshift auditorium for his funeral on Friday. Wielding hammers, pick-axes and shovels, labourers scrambled to set up stages, lights and pave a brick road to Moise's mausoleum on a dusty plot of several acres enclosed by high walls in the northern city of Cap-Haitien, Reuters reported. Demonstrators have been demanding answers for the assassination that took place on July 7. the government said that the assassination was carried out by a team of largely Colombian mercenaries.