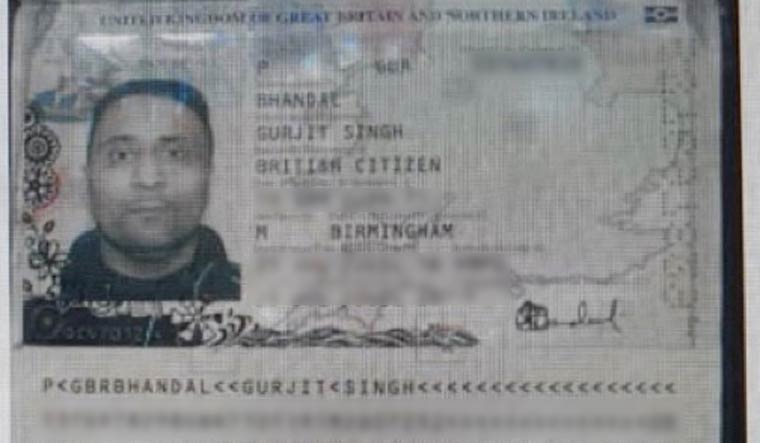 A passport snatch of reported UK resident Gurjit Singh Bhandal, accused of involvement in the alleged kidnapping of Mehul Choksi in Antigua | Image supplied by author

The mystery of Mehul Choksi’s disappearance from his safe haven of Antigua and his appearance in Dominica has catapulted to Britain. In the early hours of June 7, Justice Abroad, a legal help organisation headed by human rights lawyer Michael Polak assisting Choksi’s family, submitted a complaint to British police’s War Crimes Unit against four residents of the United Kingdom, who allegedly kidnapped the diamond merchant of Indian origin in the Caribbean. On June 8, Edwina Callister, detective sergeant at Scotland Yard's War Crimes Unit, acknowledged receipt of the complaint and said that an officer had been put on the case to review the allegations.

The complaint read that on May 23 Choksi “was lured to the other side of the island (of Antigua) by a Ms Barbara Jarabik, a Hungarian national and United Kingdom resident, where he was attacked by a large group of men, beaten bound, and gagged, and had a bag placed over his head before being forced on to a small boat from which he was taken to a larger boat which sailed for Dominica.” The complaint added: “He was severely mistreated by the use of electric shocks, being threatened with a knife, and beaten during this forced rendition to Dominica.” 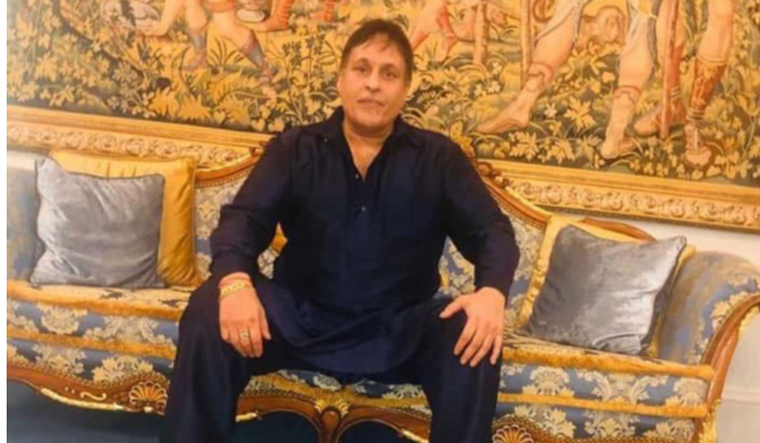 Gurmit Singh, a reported UK resident and accused of involvement in the alleged kidnapping of Mehul Choksi in Antigua | Image supplied by author

Under Britain’s Universal Jurisdiction law even a person committing a serious offence abroad can be apprehended and prosecuted in the UK. The quartet named would initially be persons of interest. If after interviewing them wrongdoing is established, sterner action will follow. Bath, though, may enjoy diplomatic immunity.

Choksi, 62, took up citizenship of the islands of Antigua and Barbuda in November 2017 under their “citizenship by investment” programme. The following year a case was registered against him in India for defrauding Punjab National Bank (PNB) of Rs13,500 crore. The matter was reported to Interpol which issued a red notice for his arrest. However, being an Antiguan national by this stage, Choksi was protected from being deported unless ruled otherwise by a judiciary.

Choksi renounced his Indian citizenship on May 30, 2018. On August 3 India asked for his extradition from Antigua based on an agreement that had become effective on that day. On November 12, 2018 Choksi challenged the legality and constitutionality of this arrangement.

On October 14,  2019 the Antiguan president gave notice to revoke Choksi’s citizenship. On January 9 Choksi filed an application questioning the lawfulness of this circular.

On April 14, 2021 Justice Marissa Robertson in Antigua issued an order for the progress of the cases with a trial in the citizenship proceedings to take place on the first available date from November 2021 and the extradition proceedings to commence after that has been determined.

The final court of Appeal for Antigua is the British Queen Elizabeth’s Privy Council in London, since she is still the island’s head of state. On November 6, 2018 a referendum was held in Antigua to move this to the Caribbean Court of Justice. But the ploy failed, with 52 per cent of voters rejecting the proposal, when it needed at least a 66 per cent majority to be approved. It could consume another six years before a final appeal is heard by the Privy Council.

Choksi’s wife, Priti, speaking from Antigua, asserted: “My husband hasn’t left this island in three years… The safest place on earth for him is Antigua.”

She then said that on the evening of May 23 she saw him off as he went out for dinner with the 31-year-old Jarabik, who had befriended him since last year. “At 5:11 pm exactly he left… that’s the last time I saw him.”

The complaint catalogued that when “he (Choksi) went to her (Jarabik’s) house, she asked him to come inside for 2 mins, 7/8 agents rushed into the house… They grabbed him and he struggled against them, they tied up his hands and legs, they put him in a wheelchair and tied him to this… These men had Indian and Antiguan accents. They were very strong like people from the army. When Mr Choksi struggled, they would shock him with a taser all over his body including on his face.” 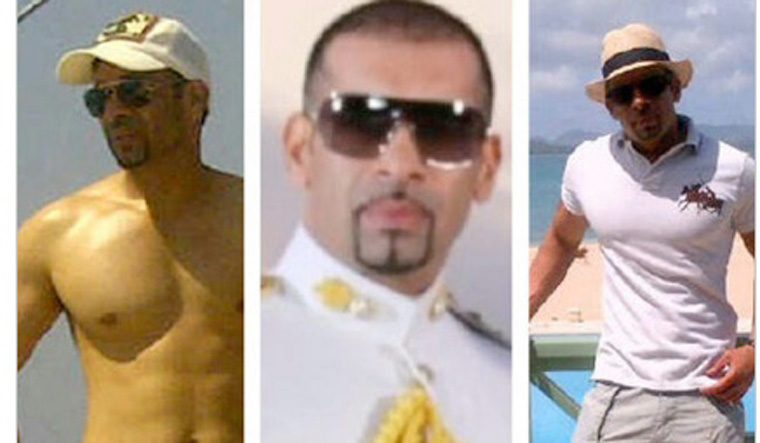 Gurdip Bath, accused of involvement in the alleged kidnapping of Mehul Choksi in Antigua | Image supplied by author

“During his final hour in the boat,” the complaint continued, “Mr Choksi received a call from the Indian authorities and spoke to a man named Narendra Singh who is working on his case. He was told that when he was going to be interrogated in Dominica he must say that he had consented to being brought there, that he was not to mention the kidnapping or going to Barbara’s house, and that he should say that they asked him to come with them and he agreed and co-operated.”

The narration of events added that at 9:30am or 10am on May 24, "the ship that Mr Choksi was on arrived in Dominica.” This is about 190 kilometres by sea from Antigua. Here he was taken into custody by Dominican police, charged with illegal entry. The court also heard from the prosecution that he should be deported to India, because of the red notice against him at the Indian government’s behest. 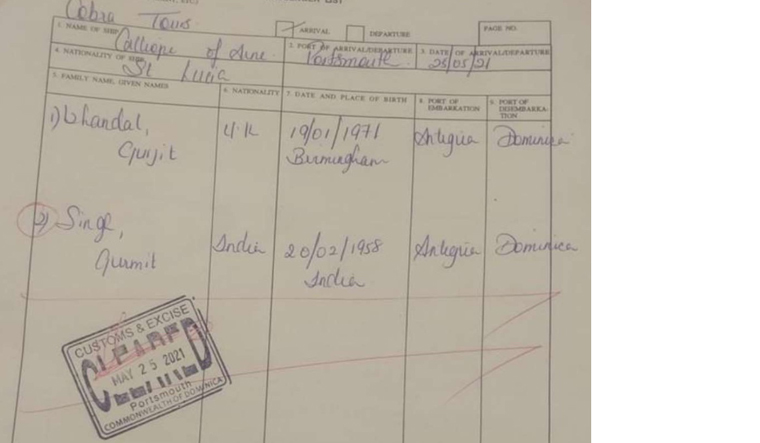 Receipt of Gurjit Singh Bhandal and Gurmit Singh's travel to Dominica from Antigua, via the ship Calliope of Arne, on May 25 | Image supplied by author

The computer at passport control at Dominica’s airport duly logged the departures of Barbara Jarabik, Gurjit Singh Bhandal and Gurmit Singh. They passed through the emigration desks at 7:48am, 8:06am and 8:01am, respectively. 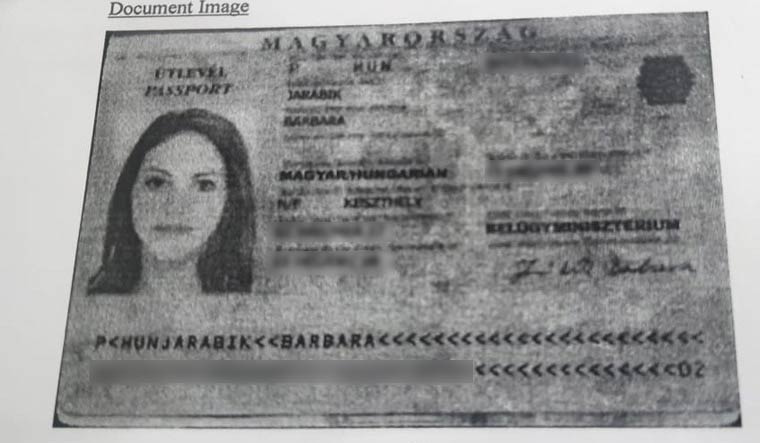 Passport grab of Barbara Jarabik, accused of involvement in the alleged kidnapping of Mehul Choksi in Antigua | Image supplied by author

The plot thickens even more when one unearths that Gurjit Bhandal and Gurmit Singh attempted to dock at Dominica on April 12, but were denied permission to do so. An email (the subject of which was “suspected human smuggling ring” from Rhoan Barker, operations supervisor at the Joint Regional Communication Centre in Barbados, in an intelligence alert to authorities of several island states in the area, wrote: “Please note that the undermentioned subjects (namely Bhandal and Singh) were intercepted in Dominica on April 12, 2021, having arrived into the country on a yacht (Lady Anne) manned by two Saint Lucian nationals. Subjects appeared to be involved in a smuggling ring. Singh and Bhandal were attempting to disembark the vessel to board a flight to the UK. They were both denied landing and subsequently left for Antigua on said yacht.”

The “concern” expressed about them was “suspected illegal migration”. Justice Abroad’s crime report to British police said: “It is believed that this trip was either an attempt at kidnapping or a reconnaissance trip.”

The two thereafter returned to Antigua. Randy Baltimore, principal inspector of customs in Antigua, in a handwritten note on the email documented that “both passengers arrived on the 15.4.21… and departed same day on o/b (on board) BA2156 (which is a British Airways flight from Antigua to London Gatwick).”

An unanswered question is, if the pair were refused immigration by Dominica on suspicion of human trafficking and illegal migration in April, what is it changed for them to be admitted in May?

At Companies House in London, which registers commercial firms, Jarabik has declared herself to be a director of Cullinan Designs Ltd, which is registered in London’s upmarket district of Mayfair. The building, though, appears to be more of a postal address rather than housing a permanent office. The company presents itself as marketing iFace Digital Mirror, an enhanced reflecting signage product made by a concern with manufacturing in the UK, Hungary, the United States and Spain.

Jalandhar-born Bath is a former director of London-based CS Global Partners, who define themselves as “legal experts in residency and citizenship by investment solutions”; and seems to continue to promote the outfit on social media. The prime minister of Antigua and Barbuda, Gaston Browne follows him on Twitter.

While Choksi’s citizenship had become a poisoned chalice for Antigua and both it and Dominica were enamoured of Prime Minister Modi after India’s amplified assistance to them in recent years, not to mention being swamped by free COVID vaccines in February, neither had as much stake in repatriating the diamontaire as New Delhi wanting him back.

In March 2018, Princess Latifa, rebelling against her father, Sheikh Mohammed bin Rashid Al Maktoum, the ruler of Dubai and the prime minister of the United Arab Emirates, escaped in a yacht and headed for India to seek asylum. This vessel was intercepted by Indian forces in the Arabian Sea, before she was forcibly returned home.

In December 2019 the high court in London handed down a verdict, which said: “The description of the way in which Latifa was treated by the Indian security services… does not give any indication that this was a ‘rescue’ (her father’s story) rather a ‘capture’.”

The United Nations Working Group on Arbitrary Detention (WGAD) in an opinion adopted in November 2020 wrote: “The detainee (Latifa) was extradited by the Indian forces, which had intercepted her yacht in international waters off the coast of Goa in March 2018, after the Prime Minister of India had made a personal telephone call to the Prime Minister of the United Arab Emirates and the ruler of the Emirate of Dubai.”

In the same opinion, regarding Christian Michel, the British aviation consultant who has been behind bars without a trial for 30 months, WGAD noted: “On 4 December 2018, Mr Michel was reportedly handcuffed, blindfolded and transported by private jet to India, in a hurried and unlawful manner that prevented him from challenging any decision.”

The Indian government has been tight-lipped on the Latifa affair; but has remonstrated on the UN’s conclusions on the Michel matter.

A red line divides what is acceptable and what is not in the democratic world. If Choksi defaulted on PNB facilities and knowingly escaped to the security of Antigua and Barbuda, he deserves to face justice. Pursuing him is therefore justifiable. But this cannot bypass due process; his arrest needs to be secured by judicial, not extra-judicial means.

The writer is a journalist living in London.

DISCLAIMER: THE WEEK has not independently verified all statements and documents presented in the article