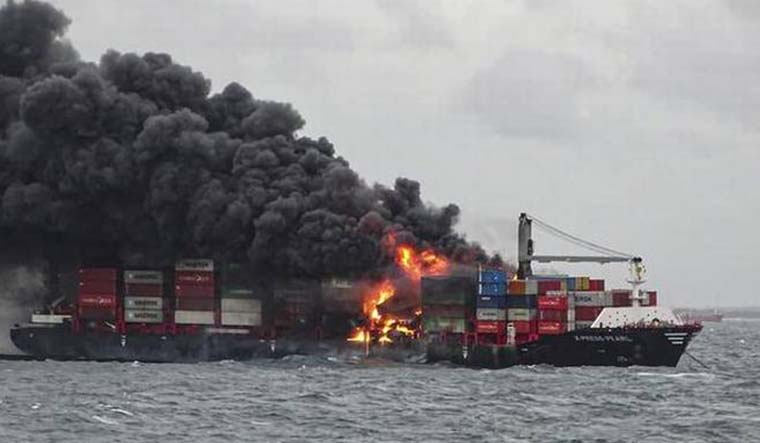 International firefighting efforts to put out a huge blaze on a container ship off Sri Lanka's coast seems to be finally bearing fruit, with the fire 'largely' contained after four days. International salvage experts with nine Sri Lankan ships and three Indian vessels have been working to douse the eight-day-old inferno on the Singapore-registered MV X-Press Pearl, but it will take a few more days to completely extinguish the fire. But the biggest worry is the oil spill.

Amid rough seas and adverse weather conditions, two offshore patrol vessels of Indian Coast Guard (ICG) - ‘Vaibhav’ and ‘Vajra’ - are continuing to battle the fire onboard container ship. In a joint effort with vessels deployed by Sri Lanka, they have carried out multiple runs along the length of the container vessel on both sides while spraying aqueous film forming foams (AFFF) solution or sea water through the ship-borne heavy-duty external fire-fighting system.

On the request of Sri Lankan authorities for firefighting as well as pollution control, India, on Tuesday, dispatched ICG offshore patrol aircraft Dornier and vessel Tug Water Lilly, for fighting the fire.

X-Press Pearl was on its way to Colombo from Hazira port in Gujarat, and was carrying nearly 1,500 containers, including 25 tonnes of nitric acid. The extreme fire, damage to containers and prevailing inclement weather have caused the vessel to tilt to one side.

"Containers stacked on both sides of the vessel are reported to be either partially or wholly burnt and are in danger of falling overboard in some locations. However, with deft manoeuvring, the ICG ships effectively sprayed the sea water/foam by reaching as close as 40-50 metres of the ship," according to the ICG. Concerted and persistent firefighting have resulted in the fire appearing to be reduced in the fore and mid-part of the distressed vessel, but continues in the aft part close to superstructure.

The ICG Dornier aircraft operating from Madurai undertook aerial reconnaissance of the area on Thursday, but no oil spill has been reported. "ICG ship Samudra Prahari, a specialised Pollution Response (PR) vessel, has also been despatched in PR configuration to augment the firefighting efforts and respond to any oil spill," ICG said in a statement.

And, to augment the firefighting operations, about 4,500 litres of AFFF compound and 450kg dry chemical powder was handed over to Sri Lankan authorities by ICG ship Vajra.

ICG formations at Kochi, Chennai and Tuticorin are kept on standby for immediate assistance towards pollution response. Continuous coordination is being maintained with Sri Lankan Coast Guard and other Sri Lankan authorities for augmenting the overall response operations towards containing the fire.

In September last year, a New Diamond oil tanker caught fire off Sri Lanka's east coast after an engine room explosion. And it took more than a week to put it out and left a 40km-long oil spill.