Navalny has been in detention since January 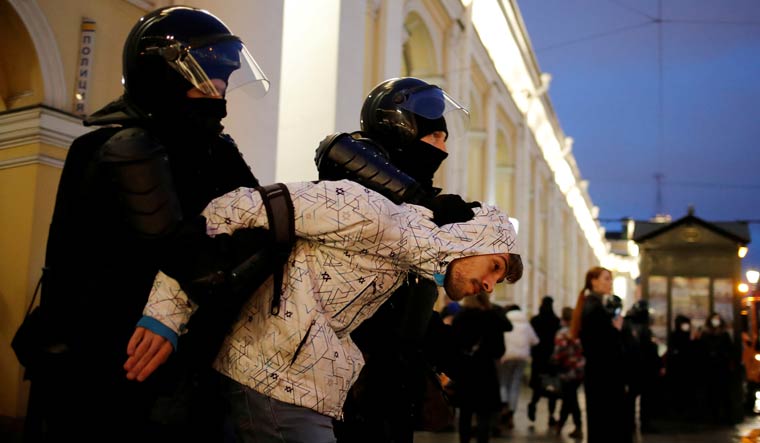 A demonstrator is taken away by law enforcement officers during a rally in support of jailed Russian opposition politician Alexei Navalny in Saint Petersburg, Russia April 21, 2021 | REUTERS/Anton Vaganov/File Photo

Navalny has been in detention since January, after being detained at a Moscow airport upon return from Berlin, where he was taken for treatment after he was poisoned in August. Navalny, whose health had been deteriorating, was moved to the prison’s hospital ward on April 19.

The Navalny founded Anti-Corruption Foundation, more commonly known as FBK, was designated ‘extremist’ at a preliminary hearing at a Moscow court on Monday and prosecutors requested the organisation be added to a list of “terrorist and extremist” organisations run by Russia's Anti-Terrorism Committee.

“The activities of Navalny's offices and FBK were immediately suspended,” FBK's director Ivan Zhdanov tweeted on Monday and attached screenshots of a prosecutor's decision.

If the group is termed ‘extremist’, activists can hand jail terms to activists and freeze the group’s bank accounts preventing it from campaigning for Navalny. The prosecutors said they requested the label of extremists for FBK as the group “engaged in creating conditions for the destabilisation of the social and socio-political situation”. The groups have also been accused of creating conditions for “changing the foundations of the constitutional order”.

Currently, the Islamic State, Al-Qaeda and the Jehovah's Witnesses are among the 33 groups that have been named extremist organisations in Russia.

Leonid Volkov, an associate of Navalny’s told Reuters, “We all understand perfectly that there is no extremism in (our) work ... The extremism allegation is being used purely as a pretext for political repression.”