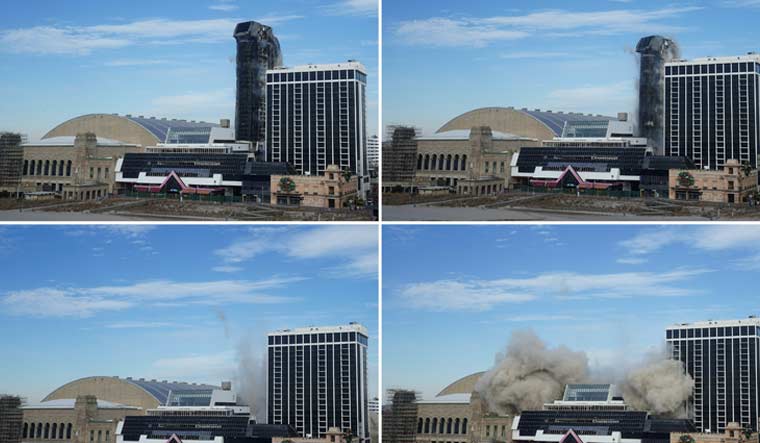 The Trump Plaza Hotel and Casino, launched by former US president Donald Trump on the Boardwalk in Atlantic City in 1984, has been demolished by a controlled implosion.

Closed since 2014, the casino was built at a cost of $210 million—but was sold off for a relative pittance, at $20 million, in 2013. With the sale, Trump Entertainment was left with just one casino, Trump Taj Mahal, which was sold to the Seminole Tribe of Florida in 2017 to become the Hard Rock Hotel & Casino.

About 3,000 sticks of dynamite were used to demolish the building, the first of three casinos Trump owned in Atlantic City before they all went bankrupt.

The casino was often host to an array of celebrities, with Mike Tyson having boxed there in the 1980s, and figures including Madonna, Hulk Hogan, Mick Jagger and Keith Richards known to have frequented it, AP reported.

Trump himself cut ties with the casino in 2009 after a series of bankruptcy filings, even suing it to stop using his name in 2014, as it was deemed insufficiently luxurious to bear his name under the terms of the licensing agreement. The words “TRUMP PLAZA”, once adorned on the top of the building in red, were taken down in October 2014.

While the demolition had been planned for some time, as the casino had also not been functional for years, it acquired poignance to some, as it takes place a month after Trump stepped down from the White House, only to face a historic second impeachment trial.