Melania Trump’s favourability drops, she hasn’t yet reached out to Jill Biden for traditional ‘tea’ 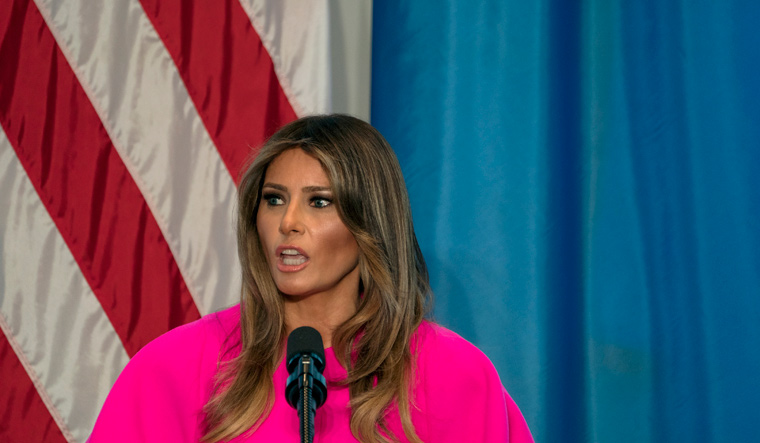 First lady Melania Trump’s favourability rating according to a CNN poll has slipped rating has slipped by double digits. Her favourability is at 43 per cent, down 11 percentage points from the 54 per cent in October. Percentage points of those who found her unfavourable also rose by 6 per cent.  Melania’s favourability numbers reportedly peaked in early May at 57 per cent, after her first official state dinner and in April 2018, when she attended former first lady Barbara Bush’s funeral.

Former First Lady Michelle Obama has continued being a popular figure, years after exiting the White House. As per a Gallup poll, Obama was the most admired woman of 2019.

On January 14, it was speculated that Melanie, Trump, who has been criticised by the media for being cold-hearted, hasn’t reached out to Dr Jill Biden— wife of President-elect Joe Biden for the traditional tea shared by the incoming and outgoing first women.

The First Lady, known to be stoic, on January 11, broke her silence on a pro-Trump mob storming the Capitol building. She wrote, “I am disappointed and disheartened with what happened last week. I find it shameful that surrounding these tragic events there has been salacious gossip, unwarranted personal attacks, and false misleading accusations on me—from people who are looking to be relevant and have an agenda. This time is solely about healing our country and its citizens. It should not be used for personal gain.” She also expressed grief over the lives lost in the incident on January 6 and added, “Our Nation must heal in a civil manner. Make no mistake about it, I absolutely condemn the violence that has occurred on our Nation’s Capital. Violence is never acceptable.”

In November 2020, rumours that Melania Trump counting days until her husband Donald was out of the house to divorce him floated. In October, there was speculation that the First Lady has a body double and that the President asked the double to accompany him on some campaign trails. These are just a few bizarre things about Melanie Trump, who, in June 2018, was criticised by the media for wearing a questionable jacket while visiting immigrants. She wore a jacket that had the words, ‘I really don’t care, do u?’ printed on the back. The timing she chose to don the jacket couldn’t be more inappropriate— it came when Melanie Trump made an unannounced trip to a youth shelter for migrants and a Border Patrol processing centre, a one day after President Donald Trump made a sudden decision to end the practice of splitting immigrant families that left more than 2,300 minors separated from their parents or guardians.