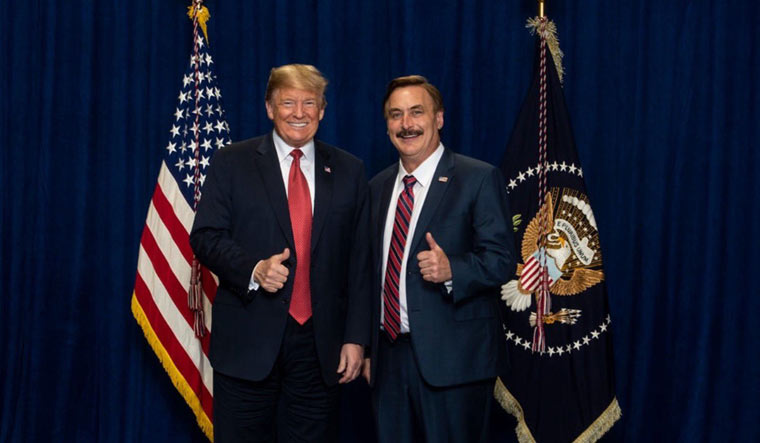 The CEO of a pillow manufacturing company who is a strident supporter of US President Donald Trump has landed in a soup. CEO of MYPillow Mike Lindell met Trump at the White House on Friday. Photographs of his notes implied Lindell suggested imposing “martial law if necessary”.

Trump, who will be replaced by Democratic President-elect Joe Biden in five days, continues to refute his election loss. Trump has been impeached for a second time by the House of Representatives for inciting a mob to storm the Capitol, an incident that resulted in five people losing their lives.

The Washington Post photographer Jabin Botsford captured the images of Lindell’s notes as he walked into the meeting with Trump. On his Facebook page, Lindell wrote, “Keep the faith everyone! We will have our president Donald Trump 4 more years!.”

The images of the notes come after sleep-aids seller Lindell deleted calls for the president to “impose martial law” on states of Arizona, Georgia, Michigan, Wisconsin, Nevada, Minnesota and Pennsylvania from his timeline. His notes also suggested moving “Kash Patel to acting CIA.” Contents of the notes aren’t clear, but it looked like it was titled, “taken immediately to save the constitution,” a Twitter user commented on the image posted by Botsford. Lindell, who spoke at the Republican National Convention, said that Democrats should be blamed for the riots in Minneapolis after African-American George Floyd died in police custody.

An official of the US Justice Department in the meantime refuted proliferating rumours that the mob at the Capitol, on January 6, intended to capture and assassinate lawmakers.