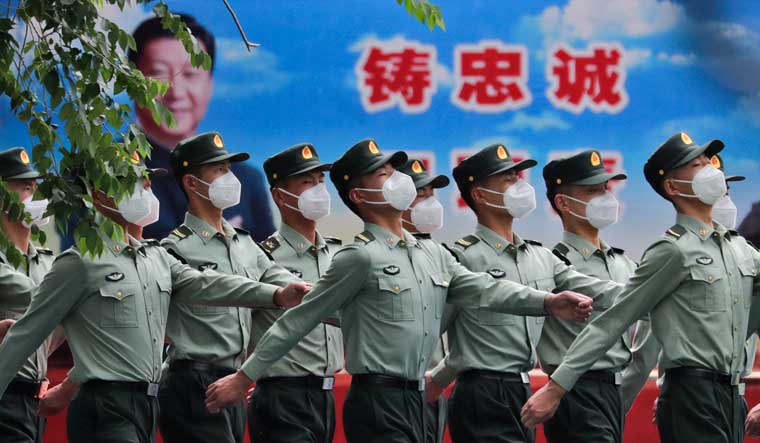 China’s revisions to the National Defence Law have come into effect. From January 1, these changes grant more power to the Central Military Commission—comprising various high-ranking military officials and headed by President Xi Jinping—and weaken the role of the State Council—comprising China’s cabinet and headed by Premier Li Keqiang—in mobilising military and civilian resources in defence of the national interest at home and abroad.

The revised law came into force after the key conclave of the ruling CPC in November last year finalised plans to build a fully modern military on par with the US by 2027.

By the year 2027, which marks the centennial of the founding of the PLA, China will build a fully modern military, a goal that is in alignment with the national strength and will fulfil the future national defence need, official media reports earlier said.

The revised law specifically stresses the need to build a nationwide coordination mechanism for the mobilisation of state-owned and private enterprises to take part in research into new defence technologies covering conventional weapons, as well as the non-traditional domains of cybersecurity, space and electromagnetics.

China has been revamping its military structure amid the ongoing stand-off with India. It recently replaced PLA Western Theatre Commander General Zhao Zongqi with Gen Zhang Xudong. Due to the induction process of the new general, the ninth round of talks as part of the Working Mechanicam for Consultation and Coordination was put off. Both sides continue to hold positions on either side of the Line of Actual Control, with the Indian Army in control of the Rezang-La ridge line while China maintains its presence ahead of finger 8 along the north bank of Pangong Tso.

China is also facing tensions with the United States in the South China Sea, as the Western superpower continues its freedom of navigation operations in the water body contested by China as well as all other regional stakeholders.

The US has also taken a more active policy over Tibet, having welcomed the Tibetan President of the Government in Exile to the White House for the first time, and recently having approved the Tibetan Policy and Support Act (TPSA) offering increased support to the Tibetan people.

Amid fears of a separatist movement in Tibet, China’s new defence policy strengthens the ability of the CMC to deal with “disruption” and protection of ‘development interests” as grounds to mobilise and deploy troops and reserve forces.

Military and political analysts said the new NDL aimed to strengthen the country's military leadership under Xi, providing it with the legal grounds to respond to the challenges of accelerating confrontations between China and the US.

Chen Daoyin, a former professor of Political Science and Law at the Shanghai University, said the changes showed the regime had gained the confidence to legitimise its long-standing principle that the party commands the gun and stamp its absolute leadership over-armed and reserved forces.

Zeng Zhiping, a military law expert at Soochow University said one of the big changes of the law was the downgrading of the State Council's role in formulating the principles of China's national defence, and the right to direct and administer the mobilisation of its armed forces.

The CMC is now formally in charge of making national defence policy and principles, while the State Council becomes a mere implementing agency to provide support to the military, Zeng, who is a retired PLA lieutenant colonel, said.

It's a big contrast when compared with developed countries like Israel, Germany and France, which prefer to put their armed forces under civilian leadership. Even in the US, the civilian-led defence ministry plays a more important role than their military top brass, the Joint Chiefs of Staff, he said.