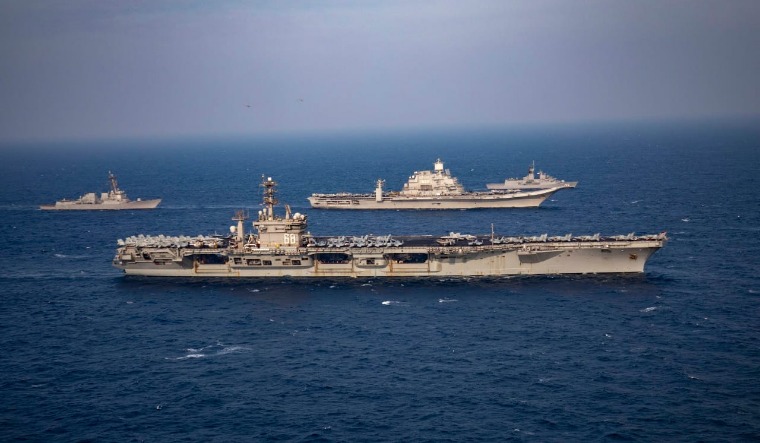 The navies of India, the US, Australia and Japan are participating in the 'Malabar' exercise in the Arabian Sea at the moment. The ships deployed include the aircraft carriers USS Nimitz of the US Navy and the Indian Navy's INS Vikramaditya. The Malabar exercise has been perceived as being a response of the participating nations to the rise of China's Navy.

Now, citing the same "aggressive" rise of China's Navy, the secretary of the US Navy has called for establishing a new 'numbered' fleet close to the border of the Indian and Pacific oceans.

Navy Secretary Kenneth Braithwaite made the comments at the US Naval Submarine League’s annual symposium on Tuesday. The US Navy currently has a total of seven fleets, deployed across the Atlantic and Pacific oceans, Mediterranean and Middle East regions. These fleets are known by their numbers—for example, Fifth Fleet that is headquartered in Bahrain. The fleets typically have a combination of ships such as aircraft carriers, submarines and other surface ships as well as refuellers and logistical supply networks.

Kenneth Braithwaite was quoted by the US Naval Institute as saying, “We want to stand up a new numbered fleet. And we want to put that numbered fleet in the crossroads between the Indian and the Pacific oceans, and we’re really going to have an Indo-PACOM footprint. We can’t just rely on the Seventh Fleet in Japan. We have to look to our other allies and partners like Singapore, like India, and actually put a numbered fleet where it would be extremely relevant if, god forbid, we were to ever to get in any kind of a dust-up."

Braithwaite emphasised the roles of allies such as India and Singapore in the proposed plan. "More importantly, it can provide a much more formidable deterrence. So we’re going to create the First Fleet, and we’re going to put it, if not Singapore right out of the chocks, we’re going to look to make it more expeditionary-oriented and move it across the Pacific until it is where our allies and partners see that it could best assist them as well as to assist us," Braithwaite was quoted as saying by the US Naval Institute.

Braithwaite is scheduled to travel to India soon. "Braithwaite said he would in the coming weeks be traveling to India to discuss both their security challenges and how the US Navy can uniquely help them, but also how India can help the US. Braithwaite made clear that the US alone cannot stand up to China and that nations around the Pacific and around the globe needed to assist in pushing back militarily and economically if there was a chance for deterrence to work," the US Naval Institute reported.

Currently, the US Navy's Seventh Fleet overseas a region from Japan up to the Indian subcontinent. A proposed First Fleet for the Indian Ocean and Pacific Ocean would reduce the strain on the Seventh Fleet and allow more effective partnerships with regional partners.

Braithwaite declared he was keen to push the idea of a new fleet for the Indian and Pacific oceans before his time at the Pentagon ends when the Joe Biden administration is sworn in in January. “Unfortunately, I don’t get a much longer stint in this seat... but I got 60 days to go out now and really grasp the bully pulpit," Braithwaite was quoted as saying by Breaking Defense, a US publication.

During his interaction on Tuesday, Braithwaite highlighted the nature of the Chinese threat.

"… the Chinese have shown their aggressiveness around the globe… Chinese presence in the Arctic is unprecedented. Most recently, I was in a trip to the Far East: every single one of our allies and partners are concerned about how aggressive the Chinese have been. I would argue with anybody that not since the War of 1812 has the United States and our sovereignty been under the kind of pressures that we see today," he was quoted as saying by the US Naval Institute.

A Pentagon report on China's military modernisation released in October noted that Beijing now had the world's largest navy. The report estimated that as of early 2020, China's Navy had around 350 vessels, while the US Navy had 293.

The US and its allies, including India, have been concerned about the prospects of China establishing bases in the Indian Ocean region. China operates a base in Djibouti and its economic influence in Cambodia and Pakistan has caused concern that the two nations would eventually host Chinese naval assets.