Does Melania Trump have a body double?

Melania has been famous for her stoicism 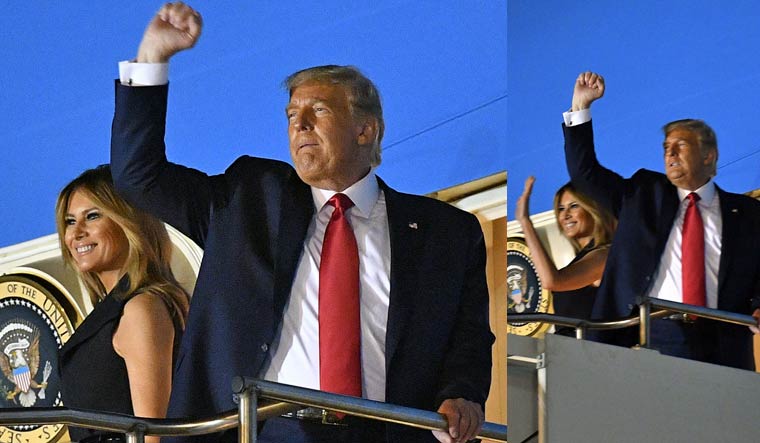 US President Donald Trump and US First Lady Melania Trump gesture and wave as they board Air Force One to depart Nashville International Airport after the final presidential debate in Nashville, Tennessee | AFP

Does Melania Trump have a body double? Theorists seem to believe so! Conspiracies about a 'Fake Melania' are doing the rounds on Twitter, especially after an image showing the first lady smiling as she boarded Marine One with husband Donald Trump on October 22 surfaced.

Melania has been famous for her stoicism-- even while in the public eye, she maintains rigid body language-- smiling or waving rarely.

Here's what Twitterati had to say:

“Today's photo of a fake Melania. They think we won't notice this?,” one user tweeted.

“Not even anywhere close to being convincing Melania doubles,” another user tweeted.

“There’s nothing more pathetic than a man having to hire a woman to pretend to be his wife. Don’t you think so @realDonaldTrump? #FakeMelania” tweeted another.

It isn't therefore, a surprise when theorists said that The President could be using a body double as the First Lady is rarely known to smile like that. “Good luck finding any photos of Melania smiling like that,” George Conway, husband of former counsellor to the president Kellyanne Conway tweeted.

With everything put into perspective, does it seem far-fetched? Maybe not! Melania didn't make too many appearances during Trump's campaign running up to the 2016 elections-- she said she needed to be home for Barron, who was 10 at the time. Melania hasn't been spotted on too many campaign rallies this time round too. She was shown to have recoiled at the President's touch after the last Presidential debate.

When similar rumours did the rounds in 2018, Trump slammed them as fake news.