Factory workers and students alike reported to have taken part 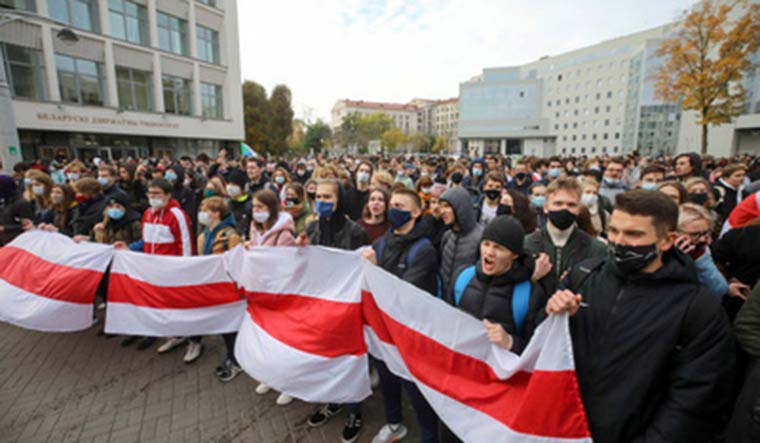 From workers to students, thousands are expected to have taken part in Monday’s national strike in Belarus, in protest against the rule of President Alexander Lukashenko, often termed “Europe’s last dictator”.

Following months of protest after a disputed election gave Lukashenko his sixth term in office, the opposition gave the president an ultimatum to resign on Monday. Around 100,000 protesters were estimated to have joined demonstrations in Minsk on Sunday, and were met with stun grenades, rubber bullets by police, who arrested over 500.

AFP reported empty streets in Minsk on Monday as what appears to be a nationwide strike comes into effect.

Belarus Nationwide strike has begun.
About a hundred people gathered at the checkpoint of the large chemical enterprise "Hrodna Azot".  Workers refuse to start the shift. Police vans have arrived. 10 workers have been detained. pic.twitter.com/mNN1URQFKJ

Another novel form of protest was witnessed in the form of cars slowing down and honking.

Exiled opposition leader Sviatlana Tsikhanouskaya said, “The regime has once again showed the Belarusians that violence is the only thing it is capable of.”

#Belarus Happening right now in #Minsk. Cars are massively slowing down and honking. That’s another form of protesting. Police previously brutally arrested motorists who were doing this, beating and dragging them out of cars, so it’s now quite safe as it might seem pic.twitter.com/bfMxxl8S8A

Lukashenko has remained sceptical about the protests, asking "who will feed the kids?" on hearing about the plan for factory workers to go on strike. Workers have reportedly been warned that they would lose their jobs if they go on strike.

While Lukashenko appears to have the support of neighbouring power Russia, Western powers including the European Union have supported the protesters, with the UK having recalled its ambassador to Belarus on October 10.