Europe sours on China: What Germany's latest Indo-Pacific shift means for the region 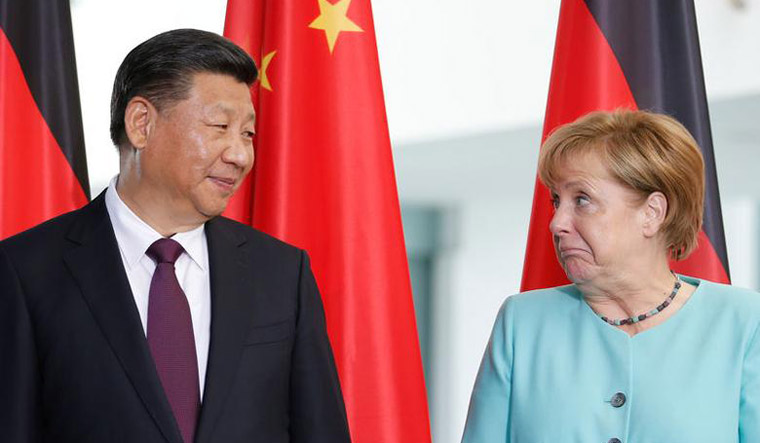 On September 2, Germany released an official foreign policy document for the Indo-Pacific, becoming the second European country after France to formally adopt a strategy for the region. German Foreign Minister Heiko Maas said the policy shift was aimed at making an active contribution to shape the international order in the Indo-Pacific. “We want to help shape that order, so that it is based on rules and international cooperation, not on the law of the strong,” said the minister. Germany wants to diversify its partnerships in the region and "avoid unilateral dependencies", according to the policy document. The shift is expected to manifest in areas such as economic partnerships, human rights and maritime security.  Germany, the foreign office stated, will look to strengthen structures of international cooperation, in particular the Association of Southeast Asian Nations (ASEAN)—comprising Vietnam, Cambodia, Thailand, Malaysia, Singapore and more—with which the country would like to cooperate more closely in future.

It is beyond doubt that the change in policy was aimed not just at China, Germany’s most important trading partner in the region. Considering Germany’s penchant for being extremely conservative in its decision-making in general, and foreign policy in particular, what the shift hopes to achieve is, first of all, to formally recognise the importance of the Indo-Pacific region—economically and geopolitically—and to modify its actions and policies to ensure greater engagement. “With the rise of Asia, the political and economic weights are increasingly shifting to the Indo-Pacific region. The region will become the key to shaping the international order in the 21st century,” says the document. In doing so, Germany has taken note of growing Chinese assertiveness, reiterating the importance of a rule-based international order.

The timing of the announcement was significant as well. It came two months after Germany assumed the six-month rotating presidency of the EU Council and right between the European visits of two of China’s senior-most foreign policy mandarins—Yang Jiechi, the head of the Communist Party's foreign affairs office, and Foreign Minister Wang Yi.

There are massive future implications associated with a potential European shift on China. As an economic competitor to China, the 27-nation EU has struggled to balance its commercial interests against its concerns for human rights. Germany is the last of Europe's big powers to sour on China. The United Kingdom has already locked horns with China over the Hong Kong issue, and has banned Huawei from 5G development in the country. France's Emmanuel Macron, in 2019, had openly stated that the era of "naivete" on the China issue is over.

However, even while the German policy action has been significant, how it is going to translate into action remains to be seen. There has been a deluge of commentaries and op-ed pieces pointing towards a major course correction by Chancellor Angela Merkel. Foreign policy, however, shifts quite slowly in most capitals; in Berlin, the pace has always been glacial. To begin with, the German economy is way too intertwined with the Chinese economy.

Germany exported goods and services worth $106 billion to China last year (total bilateral trade was worth $233 billion), which is more than what France, Italy, the Netherlands, Ireland, Sweden and Spain together sold to China. China is the biggest market for German automobile majors. Nearly 40 per cent of vehicles sold last year by Volkwagen went to China. In 2018, the company sold 42 lakh cars in China, while it sold just 3.5 lakh units in the US. It was the Chinese market which saved Germany from slipping into a depression in 2009. Therefore, when Germany announces a change in its policy towards China, it is quite unlikely to be a dramatic turnaround.

It is nevertheless important to understand the driving forces behind Berlin’s policy shift. The COVID-19 pandemic indeed played a role. Germans were mostly indifferent about China till the pandemic struck—it was a far away country and there has been hardly any cultural or people-to-people exchange. The pandemic, however, dented China’s image, as a large majority of Germans felt Beijing was dishonest about the virus and that it was somewhat to blame for the pandemic. An opinion poll held in June showed that only 10 per cent of Germans wanted closer relations with China. Moreover, China did not win any friends in Germany by criticising how it responded to the pandemic, and hinting that the Chinese response was the best. Even for someone like Merkel, who places a premium on Germany’s trade ties with China, despite its abysmal record on issues ranging from human rights to climate change, it is not possible to ignore the souring public opinion.

Second, Germany no longer seems to believe that it can transform China through trade (the wandel durch handel policy). It has been the German policy since West German chancellor Helmut Kohl visited China in 1984, accompanied by a large trade delegation, laying the foundations of the Sino-German economic partnership. Merkel herself has been a strong believer of Kohl’s theory, paying 12 visits to China in her 15 years as chancellor. The German government used to enjoy the unwavering support of its industries in maintaining robust ties with China. There has even been criticism that the big businesses such as Volkwagen and BASF, who have invested billions of euros in China, have an outsized influence on the country’s China policy. Merkel, in fact, wanted to end her career as chancellor with a big bang EU-China trade summit in her hometown Leipzig and conclude a historic treaty which would ensure a level-playing field for European business in China. But the summit had to be a virtual one because of the coronavirus, and no major breakthrough came out of it.

But, of late, the industries have grown increasingly wary of forced technology transfers, continued disregard of intellectual property rights, protectionist barriers to investment and open support of the Communist government even if the Chinese firms indulged in unfair practices. The 2016 hostile takeover of German robotics giant Kuka by China’s Midea Group touched a raw nerve in Germany. Equally alarming was the bid for chip maker Aixtron, which used to provide technological support for the American patriot missile systems. The Merkel government was forced to intervene and kill the Aixtron deal after a livid Obama White House read the riot act.

In January 2019, the Federation of German Industries (BDI) labelled China a systemic competitor and asked for a collective European response. The move seemed to have forced the European Commission to designate China as a “systemic rival” and propose a rethink of Europe’s industrial, competition, and procurement policies to ensure protection from what it called unfair Chinese competition. German companies, especially the middle level ones, are now worried about the lack of IPR protection, the growing spectre of reverse engineering and the active role played by the Chinese state in hurting German competitive advantage. It is a critical constituency that no German government can afford to ignore.

A third reason for the policy shift is geopolitical. Germany has been one of the biggest beneficiaries of an international system, a liberal democratic order policed and paid for by the US for close to 70 years. That system appears to be unravelling with Donald Trump threatening to walk away from the leadership role traditionally played by the US, asking his European allies to step up, financially and militarily. Trump is also proceeding on a head on collision course against China. For Germany, which is still part of the US-led Western democratic alliance and at the same time a major economic partner of Beijing, an emerging Sino-US cold war spells trouble. Berlin has rightly surmised that one of the critical theatres where this new cold war is going to be played out is the Indo-Pacific and it does not want to take any sides. That is why the German foreign minister made it clear that with its new Indo-Pacific strategy, his country wanted to reinforce the idea of a multi-polar world where no country was forced to choose between two poles of power, in an apparent reference to the US and China.

The document repeatedly stresses the importance of multilateralism and wants NATO to enhance cooperation with countries such as Japan and South Korea. It also calls for enhanced cooperation with ASEAN and free trade agreements with countries like Australia and Indonesia. It recognises the growing importance of India, which is mentioned 57 times in the document. In a nutshell, geostrategically, the document wants a common European policy in the Indo-Pacific, independent of the United States and China as much as possible. At a minimum, it is looking at an enhanced say for the EU.

It is easier said than done, however. For instance, the virtual EU-China summit that took place on September 14 in which Merkel, European Council President Charles Michel and European Commission President Ursula von der Leyen held extensive negotiations with Chinese President Xi Jinping, failed to achieve anything substantial. On issues ranging from trade, human rights and climate, disagreements dominated the summit. Trust deficit between the two sides has been quite apparent.

Yet, the recent crises do not mean that Germany is going to drastically alter its China policy. The Indo-Pacific region is so utterly dominated by China that it is impossible for Germany to completely rewrite its strategy. What is however, likely is an increased scrutiny of Chinese human rights record, its policy towards Hong Kong and Taiwan, the Chinese climate policy and the future trajectory of the Belt and Road Initiative. Germany is also expected to explore non-China options, such as India, Japan and South Korea and give more prominence to ASEAN. All these changes will, however, be gradual and incremental.

The German policy will also be largely affected by its new government and next leader. Merkel is stepping down after nearly 16 years at the helm. Merkel has been a staunchly pro-China leader; if Armin Laschet, the premier of North Rhine-Westphalia and the frontrunner to lead Merkel’s Christian Democratic Union, succeeds her, the current policies are less likely to be changed. But if the more conservative Friedrich Merz or Norbert Röttgen wins the leadership race, China may have to encounter a less friendly Germany. More trouble would be in the store for Sino-German relations if the Greens party, which is quite critical of China, gains an influential role in the next ruling coalition.