‘The camp has been completely destroyed,’ a witness said 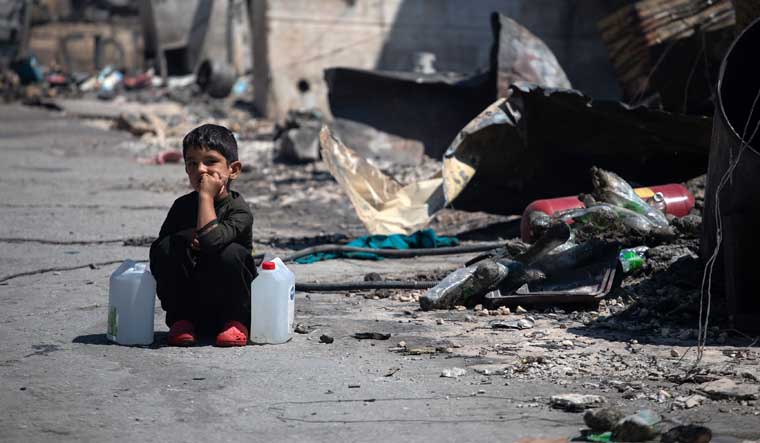 A boy with two water cans sits next to destroyed shelters following a fire at the Moria camp for refugees and migrants on the island of Lesbos, Greece, September 9, 2020 | REUTERS/Alkis Konstantinidis

According to sources, the fire might have been started by migrants protesting against coronavirus rules. No injuries have been reported yet. The extent of the damage is still being examined.

The camp that has 35 positive cases of the coronavirus, was placed under quarantine after a Somali migrant was tested positive. The 35 who were tested positive recently allegedly refused to go into isolation. The situation in the camp is dire, with people having to wait for hours to use a bathroom or queue up for almost a day for food.

"In the evening, the anger and despair of the refugees who have been interned at Moria erupted," the German group Mission Lifeline was quoted as saying in a CNN report.

The police cordoned off roads from the camp so that fleeing migrants do not enter the nearby town. A lot of people fled to olive groves surrounding the camp.

Axel Steier, Co-founder of Mission Life, said he warned that the situation would "escalate" over the camp's poor conditions, calling the lockdown measures "the final straw”.

"Among other things, we asked the federal government, again and again, to evacuate all people from the Greek camps. But hardly anything has happened," Steier added.

The Moria encampment extends out of the main UN camp into olive groves where thousands live in makeshift wooden huts.