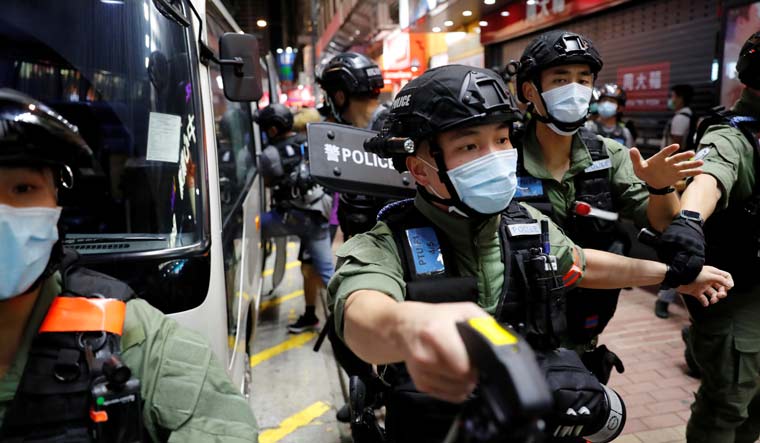 The Hong Kong police have come under criticism after a video of them tackling a 12-year-old girl at protests went viral.

The family of the 12-year-old said that she was caught in the protest crowd while buying art supplies. The video shows officers seeking to corral a group of people, including the girl, who tries to get away. But, an officer tackled her to the ground, while several others helped to pin her down.

The girl’s mother said her daughter ran away because she was scared and that she intended to lodge a formal complain and sue. She added that her daughter and 20-year-old son were fined under the city’s pandemic-related laws against gatherings. The video was posted by the Hong Kong University of Science and Technology (HKUST). The police defended their actions by saying that the girl had run “in a suspicious manner” and the officers used “minimum necessary force” to apprehend her.

Hong Kong’s thuggish police tackle a 12-year-old girl because she ran “in a suspicious manner” when the thugs chased her. They said officers used the “minimum necessary force” to apprehend her. Does it normally take 5 armed police officers to pin down 12 year old school girls? pic.twitter.com/HOWhwe2GLb

The police further added, “Police attach great importance to integrity. If any person considers he or she is affected by police misconduct, he or she may complain to the Complaints Against Police Office. It will be handled fairly and impartially according to established procedures”.

The city of Hong Kong has been in a state of turmoil since last June when protesters marched against an extradition law. The protests went on to be a pro-democracy movement of sorts, with citizens demanding that special status of the separately ruled region be respected and personal freedoms not be entailed.

Protests have been on, even after the National Security Law was passed on June 30, which made congregations protesting the government illegal giving the police the right to persecute anyone who participates in such a congregation or protest.

In July, chief executive of Hong Kong Carrie Lam announced that elections to the legislature would be postponed for one year because of the danger of the COVID-19 outbreak, but, critics accused Lam of using the pandemic to silence opposition.