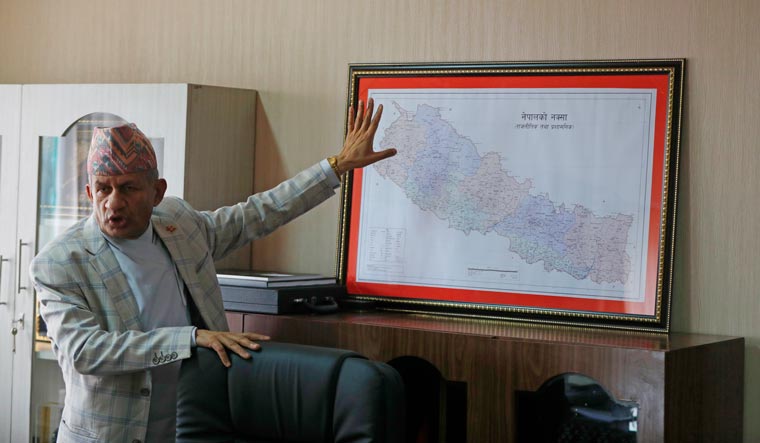 Nepals foreign minister Pradeep Gyawali points to a map of Nepal during an interview with the Associated Press in Kathmandu, Nepal, Tuesday, June 9, 2020. | AP/Niranjan Shrestha

After approving a controversial new map of Nepal's borders that depicts 335 square km of Indian territory in Nepal, the country could next seek to gain international approval for the same, as a report claims the revised map will be sent to the United Nations and Google.

Speaking to Nepalese news outlet MyRepublica, the Minister for Land Management Padma Aryal said the government was making preparations to publish the map in English and send it to the international community, including to the United Nations and to Google.

Under the revised map, Lipulekh, Kalapani and Limpiyadhura are shown as being within Nepalese borders—though India maintains control over these regions.

Whether the UN will take cognizance of the request is another matter: UN maps of South Asia come with a disclaimer saying "The boundaries and names shown and the designations used on this map do not imply official endorsement or acceptance by the United Nations" and utilise dotted lines to show regions like the Line of Control between India and Pakistan and the Line of Actual Control between India and China.

Likewise, whether Google chooses to incorporate any changes is another matter: Google publishes different versions of its world maps and marked boundaries depending on the country it is accessed in.

Padma Aryal was the minister who released the revised map during a televised press conference in Kathmandu.

On June 13, Nepal's parliament unanimously approved changes to the constitution to ratify the new map, which itself came after India opened a new road to the Kailash Mansarovar region via the disputed Kalapani valley.

The changes to the official map saw a souring of relations with India, even as Prime Minister K.P. Oli raised his anti-India rhetoric, prompting some in Nepal to wonder whether he had gone too far.

A brewing political crisis within the ruling Communist Party has emerged, highlighting the turbulence between Oli and his primary rival Pushpa Kamal Dahal "Prachanda".