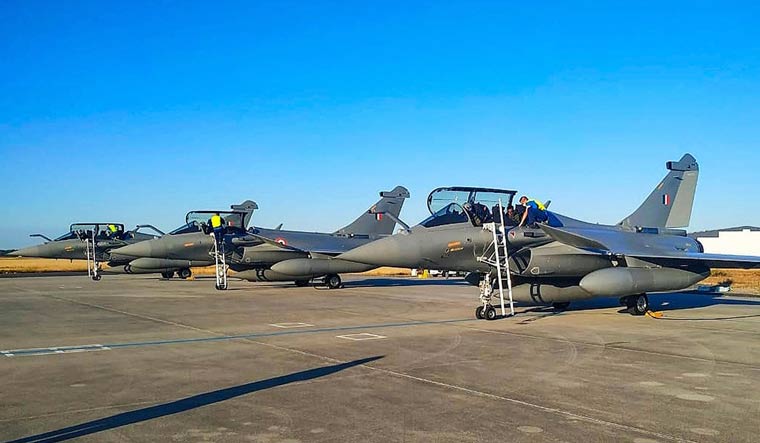 (File) The first batch of Rafale aircraft prepares to take off from Dassault Aviation Facility, Merignac, in France | PTI

Two air force bases in Qatar and the UAE went on alert on Tuesday morning as Iran conducted missile tests in waters near the facilities.

The bases—Al Udeid in Qatar and Al Dhafra in the UAE—are also used by the US military. Incidentally, the first batch of five Rafale fighters for the Indian Air Force landed at Al Dhafra on Monday night on their way from France to India. Al Dhafra has been a forward operating base for France’s Rafale fighters since 2010. The five Rafale jets are set to fly to India on Wednesday.

Lucas Tomlinson, a reporter who covers the Pentagon for Fox News, tweeted on Wednesday that the Indian Rafale pilots were also told to take cover when the Iranian missile tests happened.

Tomlinson quoted a US official as saying "three Iranian missiles splashed down in waters near the bases". The official claimed the missiles landed "close enough" to Al Dhafra and Al Udeid to be of concern.

According to reports, all personnel at the bases were told to "take cover, but no missile struck".

The US military's Central Command issued a statement on the incident, stating, ""At approximately 5.30am local time, Iran launched several ballistic missiles from Iran to the Southern Arabian Gulf. The initial US assessment indicated a threat to two bases in the Gulf region that host US troops. Out of an abundance of caution, both bases enacted a heightened alert status. The incident lasted for a matter of minutes and an all-clear was declared after the threat indicator had passed. The safety and resilience of our service members and coalition partners is a top priority."

The Iranian missile tests appear to be related to the Islamic nation's exercises in the Straits of Hormuz on Tuesday. Iran had on Tuesday announced it tested a missile that targeted a replica of an aircraft carrier.