The dark side of Imran Khan: When he 'sparked' riots in 2005 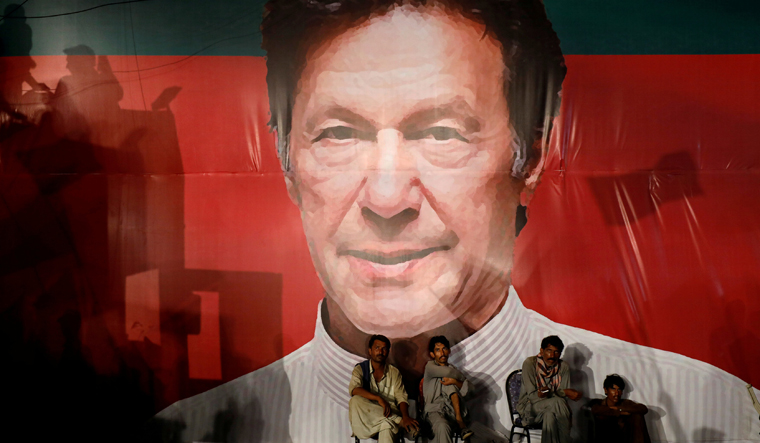 (File) Labourers, who set up the venue, sit under a wall with a billboard displaying a photo of Imran Khan, chairman of the Pakistan Tehreek-e-Insaf (PTI), political party, as they listen to him during a campaign rally ahead of general elections in Karachi, Pakistan | Reuters

In his detailed profile of Pakistan prime minister Imran Khan in Vanity Fair, Aatish Taseer writes that there is a “day-time Khan” and “night-time Khan”, someone inveighs against the West by day and enjoys its pleasures by night. He, writes Taseer, is a “fascinating mirror of the cultural confusions and anxieties of our time”.

From a former star cricketer, a ‘playboy’, and an ex-darling of the English-speaking elite West, his journey has been one for the ages—he is now an outwardly pious, self-described populist premier of an Islamic nation going through a period of churn.

Khan (widely considered to be a military-backed) came to power promising a ‘Naya Pakistan’ (New Pakistan)—a multi-tiered marketing slogan. For the domestic populace, he laid down his ‘Islamic socialist’ vision as something out of a Scandinavian utopia, and promised an end to the rampant corruption in the nation.

‘Naya Pakistan’, and its schemes like Kartarpur corridor and pilgrim visas for Indian Sikhs, was also a soft image geared specifically towards the West. When he became the prime minister, he disavowed all previous support to the Taliban, even when think tanks like Brookings argued that Khan has never opposed “[Taliban] ideology, and [their] attacks on churches, Ahmadi mosques, and other individuals and groups they deemed heretical”. He strictly admonished India for its treatment of minorities, while keeping a guarded silence over forced conversions and rampant discrimination in his backyard. A minister in his cabinet who made bigoted statements against Hindus faced the axe; at the same time, he dropped an economist in his advisory council because the latter belonged to the persecuted Ahmadi sect. Helming a country teetering on the edge of complete financial collapse, he spoke to the West of a clean slate, a clean charge and a fresh beginning.

Now, days after a US report indicting his government for continuing ‘terror support’, Khan is unravelling—at a time when Pakistan is grappling with unabated coronavirus spikes, snowballing economic woes and yet another FATF grey list—this time in the open. On Thursday, he came under fire after he called slain al Qaeda chief and 9/11 mastermind Osama bin Laden a shaheed (martyr) and said that Islamabad faced "embarrassment" by taking part in America's ‘War on Terror’.

Speaking in parliament during the budget session, Khan said the American forces entered Pakistan and killed Laden without informing Islamabad after which everyone started abusing his country. "I don't think there's a country which supported the war on terror and had to face embarrassment for it. Pakistan was also openly blamed for US's failure in Afghanistan," Khan said. "For Pakistanis across the globe, it was an embarrassing moment when the Americans came and killed Osama bin Laden at Abbottabad...martyred him. The whole world started abusing us after that. Our ally came inside our country and killed someone without informing us. And, 70,000 Pakistanis died because of US's war on terror," he said.

Bin Laden was killed by US Navy Seals in Pakistan's Abbottabad in May 2011.

Khan's remarks drew criticism from the opposition. "Osama bin Laden was a terrorist and our PM called him a martyr. He was behind massacre of thousands," said Khawaja Asif of Pakistan Muslim League-Nawaz.

Why did Khan say the things he said?

He was just echoing a popular conspiracy theory among the anti-West Pakistani Right that Osama bin Laden was a “CIA-trained asset”. He has often bemoaned the toll of ‘war on terror’ (that America roped Pakistan into, for assistance in Afghanistan) on his home country. He believes, and echoed on numerous occasions, that the US-assisted and Pakistan-trained mujahideen (meant to take on Afghan-Soviet forces) in Afghanistan ultimately turned on Pakistan after the US withdrew; this resulted in outfits like Tehreek-e-Taliban Pakistan (TTP) that carried out countless acts of violence across Pakistan, including the gory 2014 Peshawar school attack that killed over 141.

This also ties in closely with his past support for the Taliban. In 2013, when a Christian church in Peshawar was bombed and 85 worshippers killed, he sought to absolve the TTP who claimed responsibility for the strike. Always a vocal champion for talks between Pakistan government and the Taliban, Khan said the “church attack was an effort by anonymous forces to prevent dialogue” and linked the attack to US-based drone strikes in Khyber Pakhtunkhwa. Taseer writes in his profile that, days after the attack, he invited the Taliban to open a political office in Pakistan.

In 2012, after visiting the same hospital in Afghanistan where Taliban shot Malala Yousufzai for supporting women’s education, he said the insurgents were fighting a "holy jihad" against invaders in the land.

A 2012 op-ed in Dawn accused Khan of “misguiding the public by terming the Pakistani Hazara sectarian cleansing as an international conspiracy, refraining from highlighting the link between these ethnic killings and those carried out in Afghanistan by the Afghan Taliban before 9/11 and “keeping a deafening silence on Taliban’s terrorism and instead blaming the ‘War on Terror’ for all the ills befalling Pakistan”.

The Brookings report names Khan as “one of many, including Pakistan’s Islamists like Fazl-ur-Rehman [who is now looking to overthrow Khan], who espoused these narratives [of US drone strikes being the root cause of terrorism]” to make them more palatable for his liberal supporters.

In April 2005, US magazine Newsweek came out with an inflammatory story that the holy Quran was defiled by security guards at Guantanamo Bay. The magazine reported that, in order to humiliate prisoners, the US security guards flushed a holy Quran down a toilet. The publication soon retracted the story, but not before the damage was done.

According to Morten Storm, Paul Cruickshank and Tim Lister in their book Agent Storm: My Life Inside al-Qaeda, "There were deadly riots in Afghanistan. In Pakistan, opposition politician Imran Khan used the story to undermine the country’s military leader General Pervez Musharraf."

In the Cost of Counterterrorism: Power, Politics, and Liberty, Laura K. Donohue wrote that, in a press conference, Imran Khan held up a copy of the magazine and claimed that Islam was under attack in the name of war on terror. "English and Urdu publications in Pakistan focussed on the issue and Islamists charged Musharraf with colluding against the United States against Islam," Donohue wrote.

Newsweek, in a story acknowledging its error in sourcing, stated that “the spark [of the riots] was lit at Imran Khan’s press conference”.

The riots claimed 17 lives in Afghanistan.