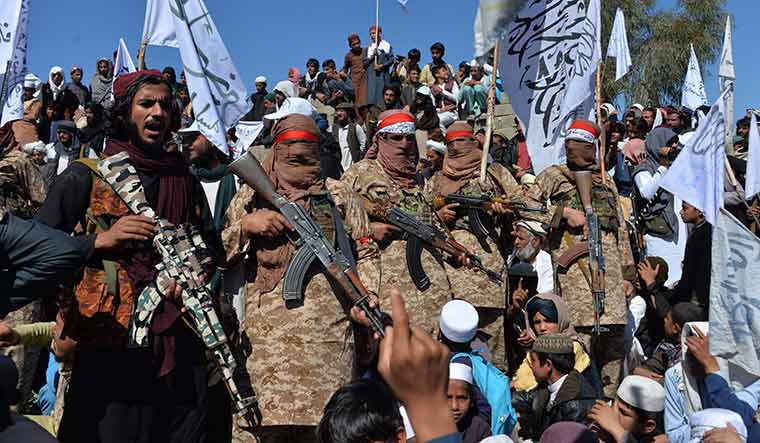 Pakistan-based Lashkar-e-Taiba and Jaish-e-Mohammad are stated to have approximately 800 and 200 armed fighters co-located with Taliban forces in Mohmand Darah, Dur Baba and Sherzad districts of Nangarhar Province in Afghanistan, according to the eleventh report of the Analytical Support and Sanctions Monitoring Team of United Nations Security Council.

According to the latest report, the Tehrik-e-Taliban Pakistan also maintains a presence in Lal Pura district, near the border area of Mohmand Darah, in Pakistan. In Kunar Province, Lashkar-e-Taiba retains further 220 fighters and Jaish-e-Mohammad has a further 30, all of whom are dispersed within Taliban forces.

The report which talks about the Taliban and other associated entities in the context of existing threats to peace, stability and security of Afghanistan, raises concern over the continued threat by Al Qaeda in the Indian Subcontinent (AQIS) after its chief Asim Umar's death. Also, following the operations by Afghan security forces against ISIL-Khorasan in Nangarhar, evidence has emerged of how narcotics networks at the district and cross-border level is driving financial flows to the Taliban.

The key development since the previous report of the Sanctions Monitoring Team of UNSC has been the efforts made to establish a peace process, initially through talks between the Taliban and the United States of America, aimed at reaching an agreement to end the 18-year war.

However, there are challenges to this process and key among them is the presence of the senior leadership of Al Qaeda in Afghanistan, as well as hundreds of armed operatives, Al Qaeda in the Indian subcontinent, and groups of foreign terrorist fighters aligned with the Taliban.

The report says that Al Qaeda has been operating covertly in Afghanistan while still maintaining close relations with the Taliban. Should conditions of the agreement with the United States become binding for the Taliban, it may prompt a split between pro- and anti-Al Qaeda camps, it says.

The monitoring team learned that at least one group of senior Taliban had already formed a new group in opposition to any possible peace agreement, purportedly known as Hizb-i Vilayet Islami and composed mainly of dissident senior Taliban members residing outside Afghanistan.

The UNSC report further says the Taliban group ''appears well prepared for the 2020 fighting season and raising the tempo of its attacks on Afghan government targets while trying to avoid provoking the United States. Differences in interpretation of the agreement could lead to periodic crises in its implementation. Hard-line Taliban believe that they can and will still achieve their aims by force.''

The Taliban’s ongoing profiting from narcotics is not addressed in the agreement but remains a challenge under any future governance arrangements in Afghanistan, it says. The scale of the problem remains huge and has been further complicated by a boom in methamphetamine production and trafficking, it added.

The monitoring team estimates that ISIL-K numbers are as low as 2,200 in Afghanistan but remains capable of mounting attacks in various parts of the country, including Kabul. ''The main risk of ISIL-K resurgence in the context of the Afghan peace process may lie in its ability to present itself as the only defiant terror group in the country and attract new recruits and funding accordingly.

In addition to their handling of any threat posed by Al Qaeda, the Taliban’s credibility as a counter-terrorism partner for the international community will rest on their success in countering the threat from ISIL-K,'' it says.

Meanwhile, the number of foreign terrorist fighters in search of a purpose and livelihood in Afghanistan, include up to 6,500 Pakistanis, which emerges as a complex challenge and would require careful monitoring. A key development in 2019 was the United States officials announcing the death of Osama bin Laden’s son Hamza bin Laden on July 31 2019, said the report. While no details were provided, once again a Pakistan link was visible , this time to the younger Bin Laden as reports emerged that he may have been killed in the Afghanistan- Pakistan border region.