With over 600,000 cases, Brazil is second only to the US by total case-count 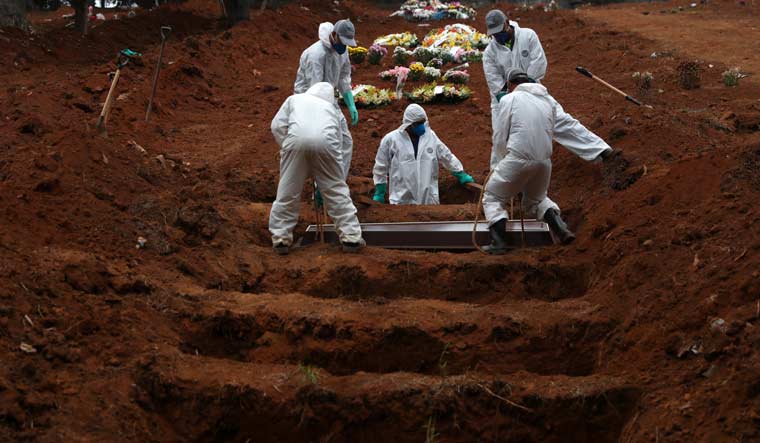 Healthcare workers in PPE suits bury a body in Brazil, as the country grapples with the world's third-highest death toll after the UK and USA | AP

Brazil has reported a record number of daily coronavirus deaths, surpassing Italy to become third in the world in number of fatalities from the disease.

The nation of 210 million people now accounts for about 40 per cent of the world’s daily virus deaths.

Mexico, in the meantime reported 816 deaths on Thursday, the second consecutive daily record there, while total deaths surpassed 12,000.

Brazilian President Jair Bolsonaro has been downplaying the pandemic since the beginning; he has criticised social distancing measures and urged regional governments to lift restrictions for the sake of the economy. Bolsonaro on Thursday  said that death is fated for everyone.

Bolsonaro, in a bid to defend himself, has also said that Sweden’s approach to handling the pandemic has been similar to his model.

Close to three-quarters of Brazilian cities have now reported positive cases, and the Health Ministry said last week that the curve was still growing. On Thursday the governor of Mato Grosso became the seventh Brazilian governor to test positive for the virus.