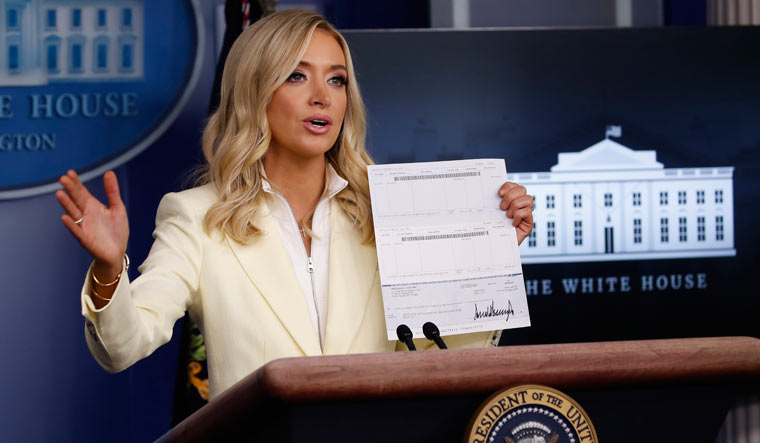 White House press secretary Kayleigh McEnany speaks with reporters about the coronavirus in the James Brady Briefing Room of the White House, in Washington | AP

The Trump administration, over the years, has always tried to show off the President’s largesse. And in an effort to do so, McEnany, in what she thought was a well-intended gesture, while announcing that Trump would donate his quarterly paycheque to the Department of Health and Human Services to “support the efforts being undertaken to confront, contain and combat the coronavirus”, revealed the president’s banking details.

“Here’s the check,” McEnany said, as she held up a real Capital One cheque, which also showed the details of where it came from, including Trump’s Mar-a-Lago, Florida, address, account numbers and routing numbers, besides featuring Trump’s name and signature.

“Today, his salary went to help advance new therapies to treat this virus, but leave it to the media to find a shameful reason not to simply report the facts, focusing instead on whether the check is real or not,” a White House administration official was quoted as saying by The New York Times.

Revelation of such details puts the banks at risk and make them susceptible to hackers. In the past, officials have used enlarged cheques of presidents for different occasions.

In 2016, Trump had made a campaign promise that he would donate $400,000 of his presidential salary.