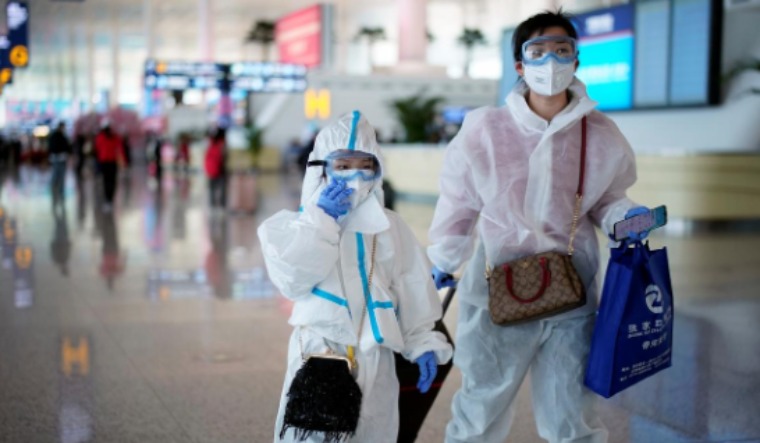 Tens of thousands of people in Wuhan, the origin point and epicentre for the coronavirus pandemic, began travelling out of the sprawling city on Wednesday as China lifted its 76-day lockdown, even as the number of new cases crossed 1,000 in the country and two new deaths heightened concerns of a rebound in infections.

The Chinese health authority said on Wednesday that 62 new confirmed coronavirus cases were reported on the Chinese mainland on Tuesday, including 59 cases of people returning from abroad, taking the total tally to 1,042.

Three new domestic cases were reported, including two in Shandong Province and one in Guangdong Province, the National Health Commission (NHC) said.

Asymptomatic coronavirus cases are those who test positive for the virus but do not show any symptoms and have the potential to cause sporadic clusters of infections.

Two deaths were reported on Tuesday, with one in Shanghai and the other in Hubei Province, taking the overall death toll in the country to 3,333, it said.

On Monday, the NHC reported no deaths for the first time after it began publishing daily coronavirus reports since January this year.

The overall confirmed cases on the mainland had reached 81,802 by Tuesday, including 1,190 patients still being treated, 77,279 patients discharged after recovery, and 3,333 people who died of the disease.

Wednesday is yet another landmark day in China as it lifted the 76-day lockdown of Wuhan city, which affected 11 million people.

No new confirmed case of coronavirus was reported on Tuesday in Hubei province and its capital Wuhan, but the province recorded one death.

On January 23, Wuhan declared unprecedented travel restrictions, including suspending the city's public transport and all outbound flights and trains, in an attempt to contain the epidemic.

The Wuhan lockdown was lifted even as epidemiologists warned that it is not the time to completely lower the guard and ease on full-scale restrictions, considering the looming threat of asymptomatic patients and possible rebound in infections, the official media reported.

As the lockdown was lifted, tens of thousands of people from Wuhan began leaving the city on Wednesday. The government has lifted the ban on road, air and train travel for all the local residents who have acquired health certificates.

At Fuhe toll gate in northern Wuhan, cars honked and rushed out after barricades were removed at midnight.

Guo Lei, who ran a business in Wuhan, drove his car with six other people aboard to the toll gate at around 8:40 pm (local time) and waited for a homebound trip.

"I can't wait to return to my hometown," said Guo, a native of east China's Shandong Province.

"I have lived in Wuhan for eight years. During the Spring Festival holiday, my relatives came to the city and helped me deliver goods. We were all stranded here due to the epidemic," Guo said.

Big data from Wuhan traffic police forecast the expressways would see the peak of outbound vehicles on Wednesday.

As more enterprises resume their operations, Wuhan has seen an increase of nearly 400,000 vehicles in transit in the past half month, and the number is expected to reach 1.8 million after Wednesday, according to the city's traffic police.

At Wuchang Railway Station in the city, 442 passengers jumped on the train K81 early Wednesday, which is heading for Guangzhou, capital of south China's Guangdong Province.

More than 55,000 passengers are expected to leave Wuhan by train on Wednesday, and about 40 per cent of them are going to the Pearl River Delta Region. Over 270 passenger trains will leave Wuhan for Shanghai, Shenzhen and other cities, Xinhua reported.

The railway authorities required passengers to scan health codes and have temperatures checked when entering the stations and wear masks to reduce the risks of infection.

Workers have disinfected bullet trains, the entrance and exits, waiting halls and platforms of the railway stations in advance.

Wuhan Tianhe International Airport started resuming domestic passenger flights early Wednesday. The airport is expected to see more than 200 inbound and outbound flights on the day, according to the airport.

"The crew will wear goggles, masks, and gloves throughout the flight," said Guo Binxue, chief attendant of the flight MU2527.

Flight attendants would provide masks for passengers if they had fever, cough and other symptoms, and record their personal information and contact history within 14 days, Guo said, adding, "We have simplified the service process to better protect everyone's health".

The central Hubei province has already lifted all the travel restrictions.