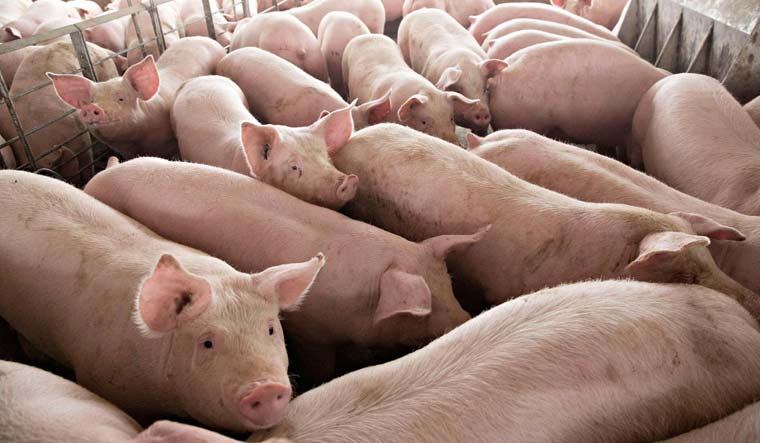 Before the coronavirus pandemic spread illness, panic and economic disaster across the world, the big epidemic story of China was one that affected not humans but pigs. Between 2018 and 2019, a quarter of the world’s pig population died from an African swine fever outbreak that spread across China.

The ASF was first detected in Kenya in 1909, and spread across Europe and the Americas in the 1960s-80s. In 2018, Shenyang, China, became home to the first and deadliest outbreak of the virus in Asia; following which, ASF started spreading in the Philippines, Vietnam, East Timor and South Korea. The virus is spread to pigs, warthogs and wild boards through ticks and causes the animal to suffer fever, fatigue, difficulty breathing, skin discolourations, blood clots, diarrhoea, vomiting and usually, death within ten days.

As the outbreak spread across Asia, leading to a spike in pork prices, countries like South Korea deployed snipers and drones to kill infected pigs that were crossing over from the border with North Korea. China lost up to 100 million pigs to the virus according to government figures and, combined with culling, lost up to 60 per cent of its pig population according to official figures cited by the South China Morning Post.

As the world’s largest importer and producer of pork, the result was soaring consumer inflation, making it harder for ordinary citizens to afford food. The Consumer Price Index in China is so closley linked to pig prices that it is jokingly called the China Pig Index; as pork prices soared over 110 per cent across the country, the CPI went up 4.5 per cent in December.

The country ramped up its surveillance of ASF and increased its imports of pork significantly as well. Over one million pigs were culled since 2018 in China; in neighbouring Vietnam, over six million pigs were culled. The economic losses were estimated by Li Defa of the College of Animal Science and Technology at China Agricultural University to be more than $140 billion.

Now, as China moves to restock its pig herds, importing thousands of high-quality French breeding pigs by flights, the country reported fresh cases of the virus on Thursday, in the northwestern Gansu province. A few days earlier, another outbreak was found in a truck transporting 83 piglets to Leshan city, Sichuan province. Another outbreak was detected in pigs illegally transported to the Inner Mongolia region, which killed 92 animals.

The illegal transportation of hogs, believed to have spread the virus further of late, is currently being investigated.

The virus is harmless to humans but at present has no cure in pigs. Researchers at the Harbin Veterinary Research Institute are at work on a vaccine, while scientists at Shandong Landsee Genetics are working on breeding ASF-resistant pigs.