Months after 'Rocky' image, Trump posts video of himself as Superman

In November, Trump posted a photoshopped image of himself with Rocky Balboa's body 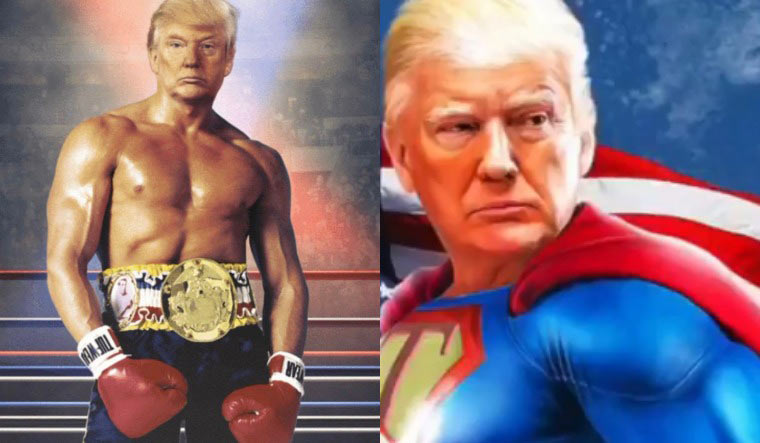 Like him or loathe him, you can never deny US President Donald Trump has a knack of creating headlines in the most unusual ways. Last November, Trump posted a photoshopped image of himself with the body of 'Rocky Balboa', the main protagonist of the Rocky film series.

The Rocky photo raised eyebrows as it came at the height of the impeachment inquiry against Trump, launched by the Democratic Party in the House of Representatives. Now, with the impeachment process over and with Trump being acquitted, the president seems to have fancied himself as another, arguably bigger superhero!

Late on Friday night, Trump posted a short video clip with photoshopped images of him as Superman. The video starts with bites from an elderly woman speaking to a Fox News journalist. The woman is quoted as saying, “I think that we need to put a cape on his back, an ‘s’ on his chest and call him Superman... No mortal man could take what he took for the last three years and two, he has done what he said he would do, and he’s still doing it."

Not surprisingly, the video is complete with orchestra music very similar to the theme music of the Superman movie series of the 1980s.

Interestingly, this is not the first time Trump has been associated with Superman. In November 2019, shortly after CNN claimed there were concerns over Trump's health, the official Twitter handle of Trump's election campaign, 'Team Trump', tweeted a photoshopped X-ray image of a skeleton in a Superman cape.

Trump's use of popular cultural figures is hardly news. During his campaign for president in 2016, Trump used the theme music of Air Force One, a Harrison Ford movie from the 1990s, in which Ford is the president.

The latest Superman video comes after a week of dramatic developments, including Trump delivering a combative State of the Union speech, his acquittal in the impeachment process by the US Senate and the confusion over the Democratic results in the Iowa Caucuses.

Trump's campaign released a statement on Friday, which after criticising the Democrats, declares, "President Trump has reinvigorated the American Dream, brought unemployment to generational lows, increased pay checks for low- and middle-income Americans, and lowered healthcare and prescription drug costs for people nationwide. President Trump will crush whichever Democrat is unlucky enough to face him in November.”