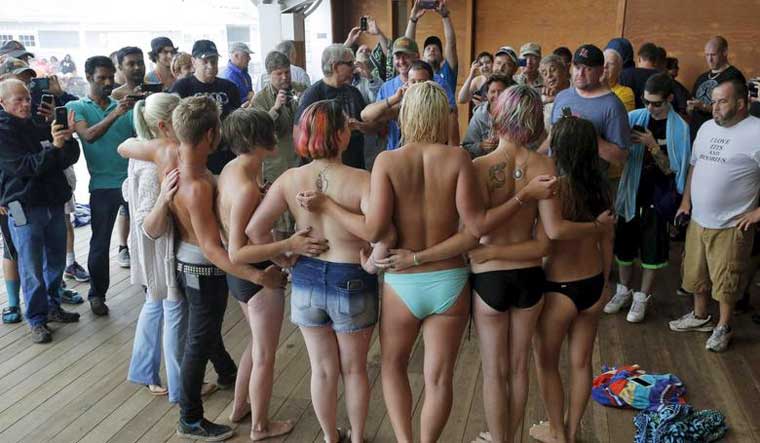 The US it seems, has a problem with topless women. That is, it seems like they have a problem with women walking around topless and have no opposition to men doing the same.

Three women were fined by a city in New Hampshire for exposing their breasts in public had argued that banning only female but not male toplessness violates the US Constitution.

The justices upheld the women's convictions for violating an ordinance in the city of Laconia that makes it illegal to show female breasts in public “with less than a fully-opaque covering on any part of the nipple.' The court also said that it won't be accepting any challenges to its judgement.

The three women were arrested in 2016. Ginger Pierro was arrested in May 2016 while she was doing yoga topless at a lakeside beach in Laconia, New Hampshire. The other two, Heidi Lilley and Kia Sinclair were arrested as they were protesting Pierro's arrest by going to the local beach, topless. They also took part in the “Free the Nipple” movement, which was described in the court papers as “sexualised objectification of women.”

Free the Nipple movement is a campaign that began in 2012, inspired by a movie of the same name. Celebrities and campaigners alike have bared their breasts in public pushing for equality, encourage empowerment and freedom of all human beings.

The organisation also works to raise awareness and spark change on a number of social issues and injustices.

The arrested women were given suspended fines of $100 each, on condition of subsequent good behaviour. The women argued that any law that punishes women for exposing their breasts while allowing men to go shirtless violates the Constitution's 14th Amendment, which requires that laws be applied equally to everyone. The New Hampshire Supreme Court, however, ruled that the ordinance did not discriminate against women, noting that it bars nudity of both men and women.