A long, six-hour debate has begun, with historic implications 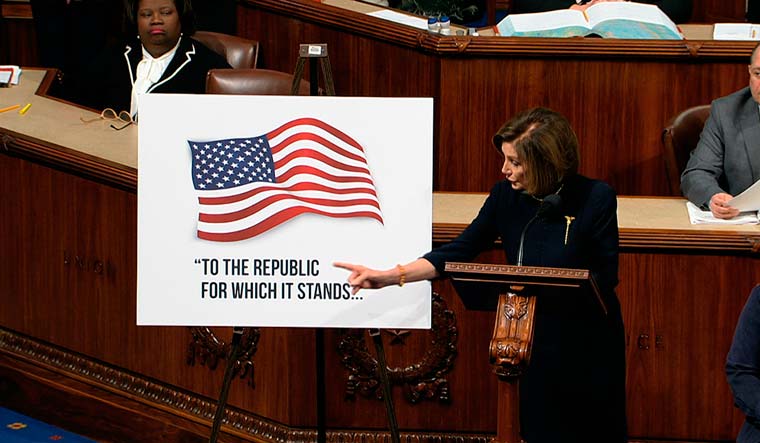 House Speaker Nancy Pelosi of Calif., points to a poster as she speaks as the House of Representatives debates the articles of impeachment against President Donald Trump at the Capitol in Washington, Wednesday, Dec. 18, 2019 | AP

The US House of Representatives on Wednesday introduced two articles of impeachment against President Donald Trump, on the charges of abuse of power and obstruction of Congress.

Six hours are allotted for the debate, held at the Capitol Building in Washington, with time allocated to be divided equally by Democrats and Republicans. An early morning vote (Indian standard time) is expected unless additional delays are triggered.

Trump is likely to be impeached by the House on Thursday morning, on account of the Democrat's majority of 233 seats (with only two members like to vote against impeachment).

This would make him only the third US President to be impeached, after Bill Clinton and Andrew Johnson.

However, his impeachment and possible removal from office will then be debated by the US Senate, likely in January 2020. The Republicans possess a majority with 53 Senators in the upper house—and in addition, such a vote would require a two-thirds supermajority in the Senate. Trump's impeachment by the Senate is thus unlikely.

Speaker Nancy Pelosi began her speech by speaking about the Oath of Allegiance. "We gather today under the dome of this temple of democracy—to exercise one of the most solemn powers that this house can take, the impeachment of the President."

Pelosi reiterated her stance that Trump's actions "gave us no choice" but to impeach, calling Trump an ongoing threat to the US's national security.

Pelosi was followed by Representative Doug Collins, who accused the Democrats of a partisan-impeachment, criticising Pelosi for saying that the matter was too serious to be left to the voters.

Two Democrats broke ranks with the party in voting to hold the debate, with Jeff Van Drew and Collin Peterson opposing the vote. Van Drew is reportedly expected to defect to the Republicans.

The process to impeach Trump was initiated by Pelosi on September 24, following a whistleblower allegation that Trump withheld US military aid to Ukraine in order to pressurise Ukrainian President Volodymyr Zelensky to investigate Trump's political rival Joe Biden and investigate a theory that Ukraine interfered in the 2016 Presidential Election.

At the heart of the controversy is a July 25 phone call between Trump and Zelensky and the allegation that there was quid pro quo between Trump and his Ukrainian counterpart, a charge that both presidents have denied.

A transcript released by the White House records the President asking Zelensky to "do us a favour", before asking him to investigate the allegation of Ukrainian interference in the 2016 cyberattacks on the Democratic National Committee.

In the back-and-forth between the parties since, Trump has asked Republicans and members of the White House not to participate in the Democrat's impeachment inquiry. The President has called the proceedings a "witch-hunt" and has expressed faith that the Senate would acquit him.