Summit derided as an utter failure as the world heads for 3.2°C of global warming 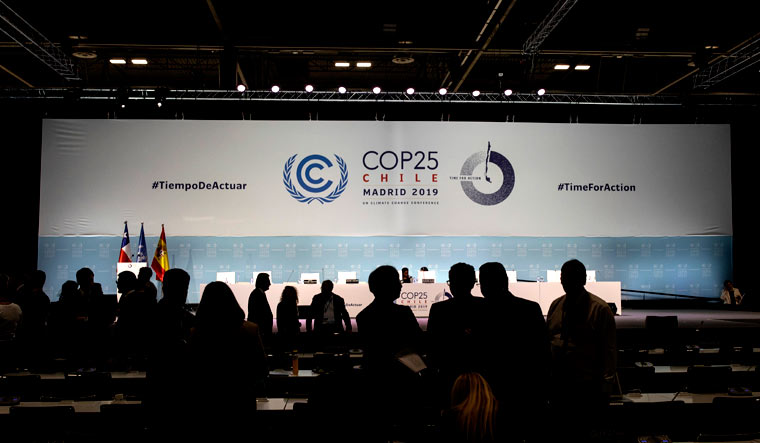 Originally intended to be held between December 2 and 13, the 25th  United Nations Climate Change Conference (COP25) negotiations at Madrid, Spain, were extended into Sunday by the Chilean chair in hopes that a consensus would be reached on regulating international carbon markets. However, the talks ended with no agreement, postponing the decision to the 2020 summit in Glasgow.

Carbon markets currently exist under the UN’s 1997 Kyoto Protocol, which allowed developing countries to sell ‘carbon credits’, incentivising nations to act on reducing their emissions and offering large polluters a way to offset their existing emissions through supporting climate-positive initiatives. According to the Environment Defense Fund (EDF), such markets if executed properly could double global carbon savings at the same overall cost of complying with the Paris Agreement.

However, the existing system has been criticised for being abused through lax regulation. With the US withdrawing from the Kyoto Protocol and the EU barring member states from buying carbon credits, this system has effectively failed.

A new system was proposed under the Paris Agreement in 2015 under Article 6, where countries could pay to reduce emissions in other parts of the world and count these reductions in their own targets. Article 6 has proposed a new global carbon market but has been mired in negotiations, however, and a last-ditch effort to find a global consensus at COP25 also failed. India was among the countries pushing for a consensus.

"We are supporting the issue of avoidance of double counting and we want a system where incentives are created for the private sector to come forward and contribute to climate action," Ravi Shankar Prasad, India's chief negotiator from the Ministry of Environment, Forests and Climate Change told PTI.

Dragged negotiations on the carbon markets made COP25 the longest meeting in the United Nations Framework Convention on Climate Change (UNFCCC) history.

Two weeks of negotiations have passed where the parties discussed methods to tackle global warming, with delegates from 196 nations failing to agree to a strong statement—one that was universally expected from this year’s summit on account of the shortfall in global climate action.

Parties were encouraged to “use the opportunity in 2020 to reflect the highest possible ambition in response to the urgency of addressing climate change and with a view to achieving the long-term goals set out in Article 2 and Article 7, paragraph 1, of the Paris Agreement."

Teenage climate activist Greta Thunberg slammed delegates at the COP25 for “misleading” people, saying the summit had become an “opportunity for countries to negotiate loopholes and avoid raising their ambition”. Over 200 young climate activists chanted “Shame!” outside the plenary hall on Friday and were forcibly removed.

According to Climate Action Tracker, only a small handful of nations including India are “2°C compatible.” That is, if all countries adhered to the 2009 Copenhagen targets, global warming would be limited to a 2°C rise by 2100—a low target that nonetheless leaves room for 56cm of sea-level rise, a doubling in the length of droughts and up to 72 million people a year facing flooding in coastal areas.

Hopes that global warming could be limited to 1.5°C, a target with far better consequences for millions of people, would require global emissions to drop by 7.6 per cent every year for a decade according to the UN Environment Programme (UNEP).

However, in reality, both the 1.5°C and 2°C targets are currently out of reach, with CAT ranking most countries’ actions as “insufficient”, as large polluters like the United States and Russia are listed as “critically insufficient” in terms of their actions. The UNEP Emissions Gap Report states that “even if all current unconditional commitments under the Paris Agreement are implemented, temperatures are expected to rise by 3.2°C, bringing even wider-ranging and more destructive climate impacts.”

What was needed in climate talks was an “over-fivefold” increase in collective ambition to get back on track to a 1.5°C target, even as global emissions hit a record high in 2018. This kind of commitment was so far absent at the COP25. 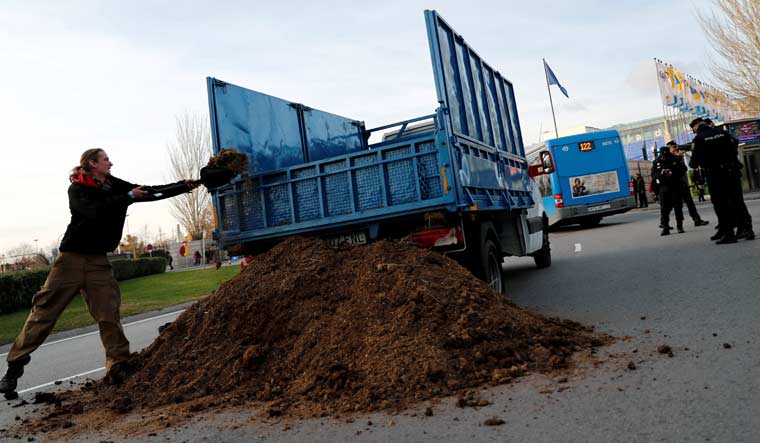 On Saturday, activists from the group Extinction Rebellion dumped a truck full of horse manure in front of the venue, saying "the horses*** stops here."

Critics of the summit say it reflected the lack of political will to act on the climate emergency. In the absence of a strong resolution to greater emissions cuts, a call for “communication” by 2020 of mid-century long-term low greenhouse gas emission development strategies” was made to the parties.

I'm still at #COP25 and going to the final plenary. I'm hearing many small nations have left because they weren't being included. People have been here all night, some slept on the floor. Many COP veterans have said they've never seen it fall apart this badly.
This is a failure. pic.twitter.com/PbBhQMfxSd

Delegates speaking to Reuters said that a handful of major states—Brazil, China, Australia, Saudi Arabia and the United States—led resistance to bolder action.

Indian Environment Minister Prakash Javedekar spoke at the conference, saying the country was “walking the talk” on climate action and was on track to meet its commitments. However, Javedekar said that the promised $1 trillion in technological and financial support from the developed world (known as the Green Climate Fund) had yet to materialise at even one per cent.

US Congresswoman Alexandria Ocasio-Cortez, who has proposed a ‘Green New Deal’ bill to tackle climate change and greenhouse gas emissions in the US, called the summit an “utter failure”.

An utter failure.#COP25 & conferences like it are intended to be actual negotiations to urgently drawdown global carbon emissions - not cocktail parties to make politicians feel better about themselves as they squash dissent & sell off our futures to fossil fuel interests. https://t.co/cw1B1dtS53

The Pacific island nation of Tuvalu called the denial of the suffering of millions from climate change a "crime against humanity."

“There are millions of people all around the world who are already suffering from the impacts of climate change,” Tuvalu representative Ian Fry told delegates. “Denying this fact could be interpreted by some to be a crime against humanity.”