Kashmiri Pandits say US Congressional hearing was one sided 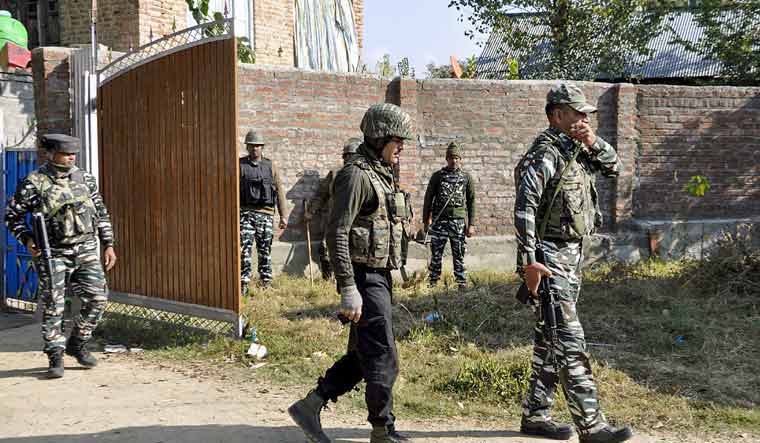 Security personnel patrol near a polling station during the first-ever Block Development Council elections, at Lassipora in Pulwama district of South Kashmir | PTI

The Congressional hearing on human rights situation in South Asia with a focus on Kashmir was one-sided, a top organisation of Kashmiri Pandits has alleged in a letter to the Congressman who chaired the committee, saying it left out one of the indigenous races of Jammu and Kashmir against whom human rights violations have been committed for the last 30 years.

The Kashmiri Overseas Association (KOA), in a letter to Brad Sherman who chaired the Congressional hearing on Tuesday, said that the goal of the hearing on October 22 was to bring forth "The Human Rights in South Asia".

"But the hearing failed in doing so as it left out one of the indigenous races of Jammu and Kashmir against whom human rights violations have been committed for the last 30 years.

"Without their testimony, the committee hearing promoted anti-Hindu sentiment, peddle an anti-Indian propaganda machine to appease the Muslim population in the United States and or the globe," KOA alleged in the letter to Sharman, the Chairman of the Subcommittee on Asia, the Pacific, and Nonproliferation of the House Foreign Affairs Committee.

"Though you had invited panelists with varying perspectives, the hearing was conducted to favour a one-sided narrative which was clearly illustrated with only three of the six panelists dominating the hearing," it said.

It said senior journalist Aarti Tikoo Singh is a victim of the brutal forced exodus of Kashmiri Hindus of 1990. She was in the Valley of Kashmir a fortnight ago. She is an eyewitness of the ground situation.

"Who better to talk about the situation than her? It was clear that she was getting cut off multiple times to express herself.

"We were hopeful when you asked what happened to the 400,000 Kashmiri Pandits who left the Valley 30 years ago, but to our quick dismay, you never gave her the opportunity to expand her response. It was clear that you did not intend to hear the reality," KOA president Dr Shakun Malik and KOA Secretary Amrita Kar said in the letter.

The denial, misinformation and silence of the forced exodus of the Kashmiri Hindu community has been rampant in narratives by the press and in discussions and debates all across the US post abrogation of the articles, they said.

India on Thursday termed as "regrettable" criticism by several US Congressmen over the situation in Kashmir, and said the comments reflected a very limited understanding of the country's history and its pluralistic society.

Referring to the comments by several US lawmakers at a Congressional hearing, External Affairs Ministry Spokesperson Raveesh Kumar said instead of criticising New Delhi, the occasion should have been used to ascertain facts on the state-sponsored cross border terrorism in Kashmir.