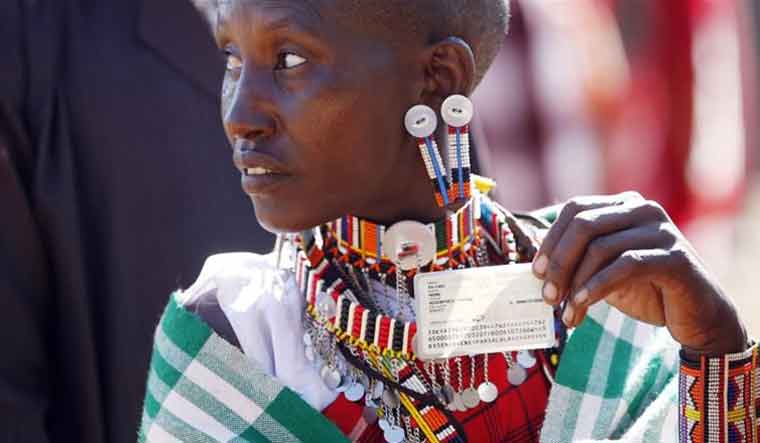 [File] Much like Aadhaar, NIIMS involves collecting biometric data after which the systems generate a unique number that will enable access to government services | Reuters

Huduma Namba and the National Integrated Identity Management System (NIIMS), the Kenyan cousins of India's Aadhaar and UIDAI, are facing a trial by fire in the Kenyan high court, its apex court. Like its Indian equivalent, Huduma Namba, a biometric ID card for Kenyan residents, is now facing the test of constitutional validity in the court.

Much like Aadhaar, India's biometric identification system, NIIMS involves collecting biometric data after which the systems generate a unique number, the Huduma Namba (huduma means service in the Swahili language), which will enable access to government services. On paper, the fundamental difference between Huduma Namba and Aadhaar is that the Kenyan NIIMS also links residents' health card to the database.

Interestingly, there is an additional factor that links the Kenyan case to its Indian counterpart—Anand Venkatanarayanan. An Indian cyber security expert and computer fraud forensic analyst, Venkatanarayanan is currently being cross-examined by the Kenyan high court in the case.

Venkatanarayanan, a vocal critic of Aadhaar, was a witness in the constitutional validity of Aadhaar case in India. While many experts appeared before the panel of judges, his testimonies were solid and complete in terms of the technicalities of Aadhaar. It is in this background that he was invited by authorities in Kenya. Venkatanarayanan currently works with tech startup HasGeek and was formerly a security engineer at Netapp.

While many countries are emulating India's Aadhaar system, what most of the nations lack is a technical know-how when it comes to scaling, posing several rights-based issues.

The technical aspects were made a part of cross-examination in the Kenyan case. This is quite unheard of in case of public interest litigations (PILs), says Anivar Aravind, a tech expert. "In India, often, the practise is to accept the government's version of technical reasoning when it comes to PILs. However, Aadhaar was one of the rare occasions in the country when it was proved that the government's technical reasoning can also be challenged and questioned, and recognised by the minority judgment," said Aravind, who works with Bengaluru-based IndicProject, on Venkatanarayanan's appearance in the Kenyan court.

The Kenyan case is just another example of how the Aadhaar's constitutional validity case as a whole, and Justice Chandrachud's judgement in particular, has inspired courts around the world to look at identification databases with a renewed interest. Justice Chandrachud's was the lone dissenting voice in the Indian Supreme Court verdict that upheld the constitutional validity of Aadhaar by a 4:1 verdict.

Much like what was widely witnessed in India prior to the September 26, 2018, verdict, the Kenyan government stated that those without the number or the card would be denied government services. However, soon the Kenyan high court stepped in and ruled that no services should be withheld for lack of Huduma Namba. But, there were no curbs on NIIMS registration and the mass registration continued as was planned by the government. Soon, a PIL was filed on the constitutional validity of the NIIMS project.

For instance, the government of Kenya justified the home-grown system, maintaining that biometric identification was a global trend. The government argued that it was not getting new information from people, but was "merely consolidating the data".

Opposing the government's stance, Venkatanarayanan stressed on the dangers of harmonising information with a lack of definite purpose. "The costs of the project will far outweigh its benefits," he is learnt to have said, citing the Indian example. The total cost of the NIIMS, according to the Kenyan government, is between KES5 billion and KES6 billion.

Venkatanarayanan has completed two days of cross-examination. The four-day hearing is expected to be completed on Thursday.