Aadhaar valid for welfare, but not safe with corporates, says SC 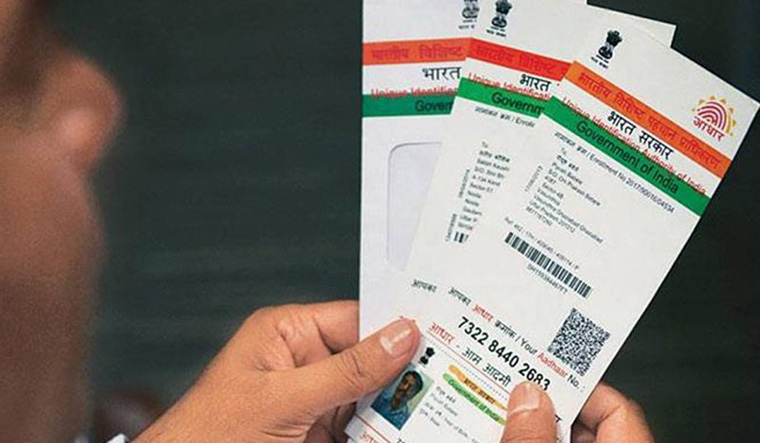 Delivering a balanced judgement on Wednesday, the Supreme Court has struck down Section 57 of the Aadhaar Act, which allowed corporate entities to access its data, but upheld the constitutional validity of the 12-digit biometric identity framework.

The Supreme Court upheld most of the provisions of the Aadhaar Act, but with conditions, by a 4:1 majority. The monumental verdict was pronounced by a five-judge constitution bench headed by Chief Justice Dipak Misra and comprising Justices A.K. Sikri, A.M. Khanwilkar, D.Y. Chandrachud and Ashok Bhushan. Justice Sikri's judgement was concurring with that of CJI Misra and Justice Khanwilkar. Justice Chandrachud was the sole dissenting voice in the verdict who opposed the constitutional validity of the Aadhaar Act.

Even as the Supreme Court upheld the constitutional validity of Aadhaar Act, some provisions of the act were struck down. These include Section 33(2) and Section 57. Section 33(2) mandates the disclosure of an individual's Aadhaar information to an officer not below the rank of joint secretary in the government of India. Section 57 involves the use of Aadhaar number for establishing the identity of an individual.

In a huge setback to the UIDAI, the Supreme Court has also struck down Section 47, saying that any individual must be allowed to file complaints. According to Section 47, only the UIDAI can raise complaints in case of Aadhaar frauds.

Limiting the collection and misuse of Aadhaar data, the Supreme Court has said that private companies as well as schools cannot insist on the 12-digit number. "No person's right can be denied on the ground of lack of Aadhaar," said Justice Sikri delivering his judgement. He also added that CBSE, UGC and NEET cannot mandate Aadhaar cards from students.

The judgement by Justice Chandrachud, one of the five judges delivering the verdict, has asked all telecom operators to immediately delete and destroy the Aadhaar data that they have collected.

The five-judge Constitution bench said Aadhaar is meant to help ensure benefits reach marginalised sections of the society and takes into account the dignity of people not only from the personal but also from the community point of view.

Maintaining that Aadhaar is serving a bigger public interest, the Supreme Court however, warned against exclusion of beneficiaries from schemes due to the Aadhaar system.

As many as 31 petitions, including one by former High Court judge K.S. Puttaswamy, were filed in the Aadhaar case. After a marathon hearing that went on for 38 days, spanning four-and-half months, the five-judge bench had on May 10 reserved the verdict on the matter.

The petitioners had opposed the Aadhaar project on various fronts, including state surveillance. Another important argument against the use of Aadhaar was it was built on implied consent. The pleas had also opposed the use of biometrics for identity purpose, citing security concerns.

A key argument against the Aadhaar scheme was that it violated the nine-judge bench verdict that had held that Right to Privacy is a fundamental right under the Constitution.

The Centre, the UIDAI, the governments of Maharashtra and Gujarat and the RBI had argued in favour of the Aadhaar (Targeted Delivery of Financial and Other Subsidies, Benefits And Services) Act, 2016 and were represented by the Attorney General, Additional Solicitor General Tushar Mehta, senior advocates Rakesh Dwivedi and Jayant Bhushan and lawyer Zoheb Hossain.