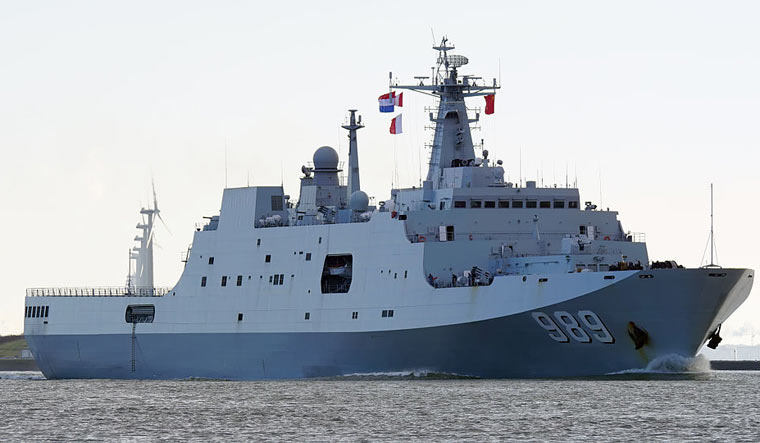 In 2005, Booz Allen Hamilton, a US defence consultancy, coined an arguably exotic term to describe China's plans to expand its influence in the Indian Ocean region. The 'String of Pearls' strategy revolved around the building of civilian infrastructure in maritime states stretching from the South China Sea up to the Middle East. These 'bases' would eventually be used to house Chinese military assets.

Over the years, China has vehemently denied the existence of the String of Pearls strategy and affirms its intentions are peaceful. However, China's pursuit of the One Belt, One Road initiative to expand trade and transport links with partner nations has not lessened suspicion of Beijing's ambitions. In addition to commerce, China has also been busy as a supplier of increasingly sophisticated naval hardware and technology throughout the Indian Ocean region, including many nations close to India.

In the past one week, two news reports have highlighted China's transition from being a supplier of low-cost, unsophisticated equipment to a provider of sophisticated wares. China's engagement with Thailand and Bangladesh as a supplier of high-end weaponry and associated systems arguably shows its lead over India in winning influence in the region.

Over the past decade, India has increased its engagement with nations in the Indian Ocean region such as the Seychelles, Myanmar and Vietnam. But much more needs to be done if New Delhi has to catch up with Beijing.

On Monday, the Royal Thai Navy signed an agreement with China Shipbuilding Industry Corporation for the supply of a single 'Type-071E' amphibious assault warship.

The contract for the Type-071E ship is valued at approximately $200 million and envisions the construction of the ship in three years. When delivered, the amphibious assault ship will be the largest warship in the Royal Thai Navy, having a displacement of over 20,000 tonnes and a length of about 200 metres.

In 2017, the Royal Thai Navy signed a $390 million contract to buy one S-26 conventionally powered submarine from China.

On Thursday, BenarNews, an affiliate of Radio Free Asia, quoted a Bangladeshi official as saying China would help the country build a base for its nascent submarine fleet.

Retired colonel Faruk Khan, a member of Bangladesh's Parliamentary committees on foreign policy and defence, spoke to BenarNews about Chinese assistance for Bangladesh's first submarine base.

Khan claimed the base would be built at Cox's Bazar. In 2016, Bangladesh purchased two used 'Ming' class conventionally powered submarines from China at a cost of about $200 million. The New Age Bangladesh reported in May that construction of the proposed submarine base would cost about $1.2 billion.

In April this year, the Bangladesh Navy took delivery of two Type C13B 'corvettes' from China. Corvettes are small warships, weighing less than 2,000 tonnes, but are capable of carrying missiles, guns and torpedoes. The two vessels for Bangladesh carry anti-ship missiles and a short-range air defence system.

From Malaysia to Pakistan...

Bangladesh and Thailand are not the only countries that have turned to Chinese naval hardware in recent times. In April 2017, Malaysia signed a $286 million contract with a Chinese shipyard to deliver four 700-tonne patrol boats. While Indonesia has had disputes with China on maritime boundaries, these have not stopped Jakarta from buying anti-ship missiles from Beijing.

However, the largest user of Chinese hardware in India's neighbourhood has been Pakistan. Pakistan has ordered four 'Type-054P' frigates from China. Weighing approximately 4,000 tonnes, these ships will be the most well-armed surface ships in the Pakistan Navy, carrying long-range anti-ship and medium-range air-defence missiles. These ships are due for delivery from 2021.

In 2016, China confirmed a contract to supply eight conventionally powered submarines to Pakistan. The contract, valued at around $5 billion, envisions the supply of four submarines by 2023; another four vessels will be built in Karachi after that.

Pakistan already operates Chinese-built warships and missiles. China's involvement in the construction of the Gwadar Port in Pakistan's Makran coast continues to raise fears in the US and Delhi that Chinese warships could use the facility in the future.