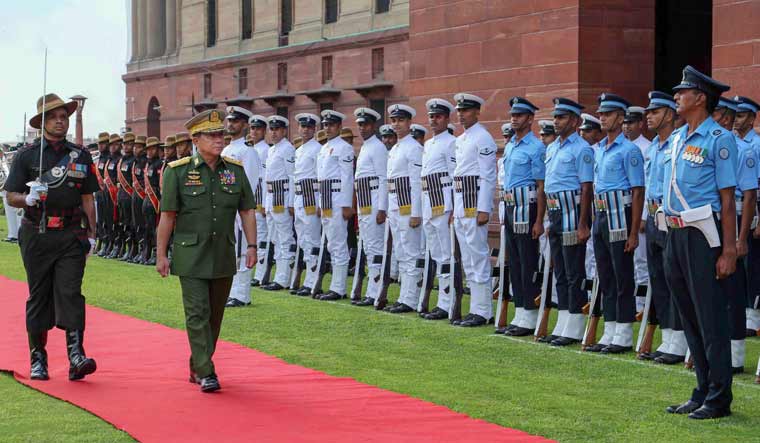 A group of senior officials from the Myanmar Navy will come to the Indian Navy's submarine training school in Andhra Pradesh to get basic training in underwater operation. The visit comes after New Delhi has agreed to hand over a Soviet-era Kilo-class submarine to Myanmar.

The official schedule of the officer’s visit is yet to be finalised, but they are expected to visit INS Satavahana, the Indian Navy’s premier submarine training base in Vizag, within the next couple of months.

The INS Sindhuvir, a Russian Kilo-class diesel-electric attack submarine, will become Myanmar’s first submarine when it is handed over later this year. New Delhi has already received the required permission from Russia to transfer the submarine.

The transfer is seen as India's attempt to enhance strategic and defence co-operation between the neighbouring nations. Myanmar is already in talks with Russia to get new submarines and the INS Sindhuvir will come in handy for training experience.

According to official sources, the handing over of INS Sindhuvir was featured in talks held in New Delhi on July 29, between Indian defence and security officials and the visiting Chief of the Myanmar Armed Forces (Tatmadaw), Senior General Min Aung Hlaing.

"Myanmar is a key pillar of India's Act East Policy towards prioritising relations with its East Asian neighbours. India has steadily increased defence co-operation with Myanmar in recent years," a statement from the Ministry of Defence said.

INS Sindhuvir, which was bought from Russia will be given to Myanmar for training purposes. The submarine is currently undergoing its refit in the Hindustan Shipyard Limited (HSL) in Vizag. HSL’s target is to finish refurbishing the submarine by the end of this year.

The submarine has a submerged tonnage of 3,074 tons and is 72.6 meters long with a beam measurement of 9.9 meters. The vessel is armed with the Russian 3M-54 Kalibr short-range, subsonic cruise missile, and torpedos.

It is notable that China has been constantly making efforts to provide underwater capabilities to its neighbouring countries. After supplying two submarines to Bangladesh, Chinese will supply submarines to Thailand as well.

New Delhi has been constantly engaging with Myanmar. India has already agreed to assist Myanmar in building Offshore Patrol Vehicles (OPVs) in Indian Dockyards and also to train their pilots on Russian Mi-35 helicopters.

In 2013, as part of the defence co-operation, both navies engaged in coordinated patrols along the maritime boundary between Myanmar’s Coco Island and India’s Landfall Island.

In 2017, a $37.9 million deal for supply of lightweight torpedoes was finalised with Myanmar.