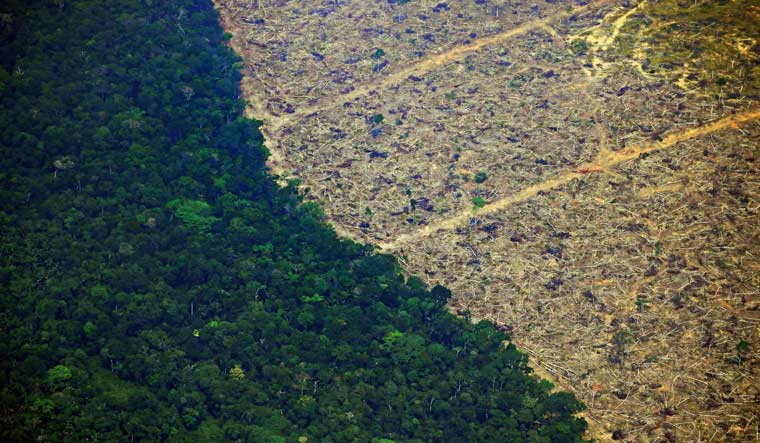 Aerial view of a deforested piece of land in the Amazon rainforest near an area affected by fires, about 65 km from Porto Velho, in the state of Rondonia, in northern Brazil, on August 23, 2019 | AFP

After international criticism mounted over his failure to protect the rainforest, Brazil's president Jair Bolsonaro has ordered troops to help fight thousands of wildfires in the Amazon forest.

The dramatic scale of this year's fires is the result of a significant acceleration of deforestation for the lumber industry, for agriculture or for other human activities.

The numerous fires that have engulfed the Amazon are fuelled mainly by trees, vegetation and other byproducts of deforestation in cleared areas, experts told AFP.

"In the tropics, fire is used extensively in a land-use environment," said Jeffrey Chambers, a scientist at the Lawrence Berkeley National Laboratory and a specialist in rainforests.

"It's how you get rid of your agricultural waste products... And part of the reason why that works is because those fires don't generally move into the forest," he explained.

"A tropical rainforest is generally not flammable" because it's so humid.

In contrast, Californian forests are so dry and they can go up in flames at the smallest spark.

Amazon deforestation began in earnest in the 1970s, reaching its peak rate at the end of the 1990s and the start of the 2000s.

In 2004, about 11,000 square miles (28,000 square kilometers) of forest had been cleared in Brazil alone (the Amazon spreads over nine countries, but 60 per cent of the rainforest is in Brazil).

Deforestation then slowed down significantly. It picked up again in 2014, but it never reached the same level as the previous decade. Last year, about 2,900 square miles disappeared, according to Brazil's National Institute for Space Research (INPE).

But the trend reversal is worrisome. In July alone, more than 870 square miles were cleared.

Official figures show nearly 73,000 forest fires were recorded in Brazil in the first eight months of this year—the highest number for any year since 2013. Most were in the Amazon.

During a forestfire, CO2 will released into the atmosphere immediately. When a tree is cut, the process of decomposes takes many years and at the end of it, carbon stored in the trees will reenter the atmosphere.

Forests contain carbon, stored in the trees and vegetation—to the tune of 459 tonnes per hectare in the Amazon, Diego Navarrete, a carbon specialist at the NGO The Nature Conservancy told AFP.

Hundreds of millions of tonnes of carbon released into the atmosopher will drive global climate change.

US President Donald Trump said Friday he had offered to help Brazil to help figth wildfires burning in the Amazon. "I told him if the United States can help with the Amazon Rainforest fires, we stand ready to assist!" Trump tweeted.

Climate change activists have held protests in London on Friday, urging President Jair Bolsonaro to do more to halt the fires in the Amazon rainforest. Protests are being planned for other European cities, reports AFP.

Protesters who gathered opposite the central London embassy, chanted "climate justice" and "save the Amazon" as they unfurled signs reading "stop destruction now", "save our planet" and "I want you to panic".

Demonstrations were held outside the Brazilian embassies in Berlin and Madrid, the consulate in Barcelona, and in Turin, northern Italy.

Brazil's indigenous chief Raoni has accused President Jair Bolsonaro of wanting to destroy the Amazon rainforest. Raoni, who is famous for his work campaigning in defense of Brazil's rainforest, pleaded for international help to extinguish the fires.

The elderly Kayapo chief, internationally recognizable through his traditional lip plate and feather headdress, called for Bolsonaro's removal from power, as a global outcry over the blazes ignites protests around the world.

"He wants to finish with the forest, with us. It's really terrible what he does," Raoni Metuktire told AFP by telephone from Germany, accusing Bolsonaro of emboldening farmers, loggers and miners.

"We have to get him out soon."