'US to press Imran to take irreversible action against terrorists' 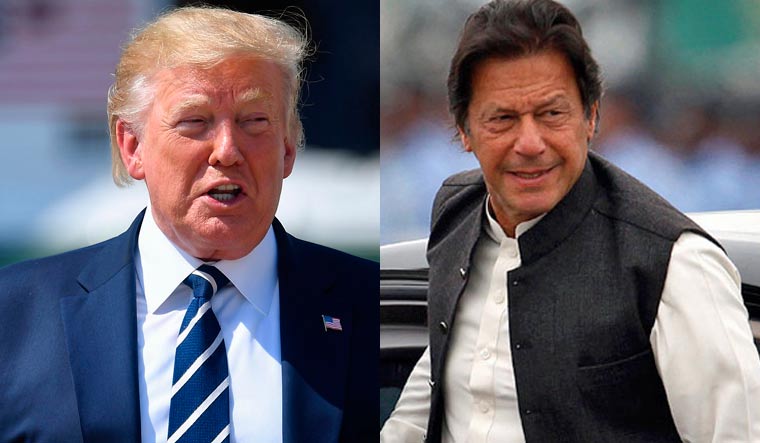 The United States would press Pakistan Prime Minister Imran Khan, who is slated to meet President Donald Trump next week, to take irreversible action against terrorist and militant groups, and to facilitate peace talks with the Taliban for an intra-Afghan dialogue, the White House said Friday.

Khan, the 66-year-old cricketer-turned politician, is scheduled to meet Trump at his Oval Office on Monday, the first by a Pakistani leader in nearly four years, the last one being that of Nawaz Sharif in October 2015.

He is travelling to the US at an invitation by Trump and the Administration is preparing to give him a warm welcome which includes a traditional welcome at the White House, one-on-one meeting at the Oval Office and a working luncheon in the presence of several of his Cabinet colleagues and leaders from the Pentagon.

However, ahead of the visit, a senior administration official ruled out lifting suspension of security aid to Pakistan unless it sees sustained, decisive and irreversible action against terrorist and militant groups.

"As you know, we suspended security assistance to Pakistan in January 2018. And as of now, there's no change to that policy," the official said in response to a question.

"The purpose of the visit is to press for concrete cooperation from Pakistan to advance the Afghanistan peace process, and to encourage Pakistan to deepen and sustain its recent effort to crack down on terrorist and militants within its territory," the senior administration official told reporters during a conference call.

The official noted that by extending the invitation to Khan to visit the White House, the US also want to send a message to Pakistan that the "door is open to repairing relations" and building an enduring partnership if Pakistan "changes its policies" with regard to terrorists and militants.

From the US perspective, the President will be most interested in encouraging Pakistan to assist in the Afghanistan peace process. "We're hoping that the discussions are productive," the official said.

Prime Minister Khan's visit is an opportunity to incentivise Pakistan to use the full leverage and influence on the Taliban to advance the peace process in Afghanistan.

"We are calling on Pakistan for assistance in moving the peace process forward," the official said, speaking on condition of anonymity.

"We do appreciate the initial steps that Pakistan has taken to facilitate this effort. We are reaching a critical juncture in the peace process. We are asking Pakistan to pressure the Taliban into a permanent ceasefire and participation in intra-Afghan negotiations that would include the Afghan government," the official said.

Asserting that the security assistance to Pakistan continues to be suspended, the official said there has been only minor exceptions for assistance that is directly beneficial to US security.

"By and large that security assistance is still suspended. We will consider changing that suspension on certain items if Pakistan meets our security concerns both in Afghanistan, and with regard to some of the externally focus groups like Lashkar-e-Taiba and Jaish-e-Mohammed. But as of now, there was no change to that suspension and security systems," the official said.

Given the history of Pakistani cooperation with these unhelpful groups, the United States is "not under any illusion", that the initial steps that have been taken thus far, the administration is not taking them at face value.

"We are monitoring the situation. We will wait and see if the steps are made irreversible and sustainable," the official said, adding that the Trump Administration has "not made a final evaluation" on whether that's the case.

"But we also see that this visit could incentivize Pakistan to continue down the path that they have started. They've facilitated contacts to Taliban and met some of our requests with regards to the Afghan peace process. We're at a critical juncture and we need to see more cooperation from Pakistan. They need to use their full leverage in this endeavour. And so we see this visit as an opportunity to encourage them to do more," the official said.

Discussions with Pakistan will also include potential cooperation on trade, energy and women's issues. "We want to send that message that the doors are open," said the official.

During the meeting, the White House will encourage Pakistan to "create" opportunity for enhancing regional economic development and connectivity.

"For example, we would encourage Pakistan the ease restrictions on trade transcending Pakistan between India and Afghanistan. And we think this would be a very positive step and will demonstrate Pakistan's commitment to a peaceful, prosperous South Asia," the official said.

On his maiden visit to the US, Khan will be welcomed by Trump at the White House. The visit will focus on strengthening cooperation between the two countries to bring peace, stability and economic prosperity to the region, the official said.

The two leaders will discuss a range of issues, including counterterrorism, defence, energy and trade, the official added.

Prominent among those present from the US side would include Treasury Secretary Steven Mnuchin; Commerce Secretary Wilbur Ross, Energy Secretary Rick Perry, Acting Secretary of Defense Richard Spencer and Chairman of Joint Chief of Staff General Joseph Dunford.