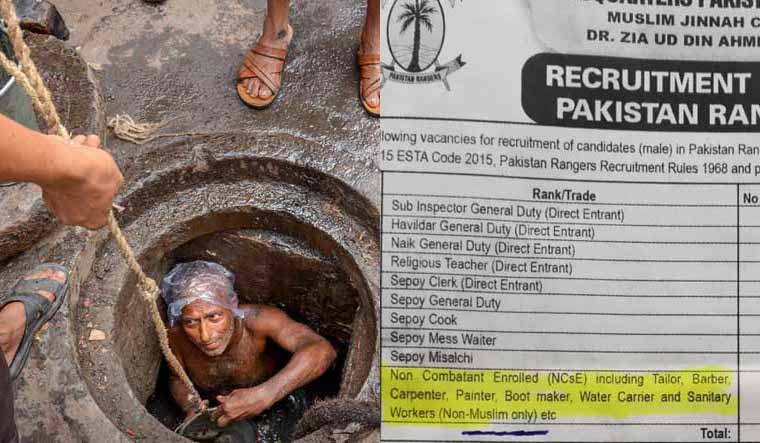 Pakistani news organisations reported on Friday that the country's Army had modified an advertisement seeking applications only from Christians for sanitation jobs. The move came after criticism on social media.

The advertisement was issued by the Mujahid Force unit of the Pakistan Army. According to Samaa TV, the Mujahid Force had also advertised vacancies for the posts of drivers, sepoys and tradesmen, but these did not have any criteria for religion.

Dear @OfficialDGISPR,this is not the 1st time such ads have appeared. As a #PakistaniChristian I feel no shame in cleaning my country but this policy muds the image of #Pakistan being discriminatory against a religious minority. Please take notice. #ChristiansAreNotJustSweepers https://t.co/qFDX3AjKiT

Advertisements such as this one have regularly been issued by government organisations in Pakistan and the issue highlights discrimination against Christians, with members of the community commonly associated with sanitation and sweeper jobs. According to World Watch Monitor, an organisation tracking persecution of Christians worldwide, the “minority representation” in sanitation jobs in Pakistan is over 80 per cent though Christians constitute just two per cent of the country's population.

Human rights lawyer Mary James Gill tweeted on June 24 to Major General Asif Ghafoor, the spokesperson of the Pakistan Army. She tweeted, “Dear @OfficialDGISPR,this is not the 1st time such ads have appeared. As a #PakistaniChristian I feel no shame in cleaning my country but this policy muds the image of #Pakistan being discriminatory against a religious minority. Please take notice...”

Soon other activists, journalists and even common social media users criticised the Pakistan Army advertisement. Early on Friday, activist Salman Sufi, who won the Mother Teresa Award for his work on women's empowerment in October 2018, tweeted that the advertisement had been modified, with the reference to Christians being removed.

Sufi tweeted, “Great news. Thanks to @OfficialDGISPR for removing the Christian only clause in call for application for sanitary workers paving way to ensure Christian Pakistanis are not labelled as just for sanitary jobs. Heartening our request was accepted & the clerical mistake was fixed.”

Writing for World Watch Monitor in 2018, activist Asif Aqeel noted the association of Christians in Pakistan with sanitation work had its roots in the fact that most Christians in the country were descendants of Hindu 'untouchables' who converted in villages of the Punjab province over a century ago. He wrote that this meant Christians are still often called chuhra (toilet cleaner) in Pakistan and are frequently considered to be “low born”, “filthy” and having “low intellect”.

In addition to social stigma, most of the people working in such sanitation jobs are poorly paid and prone to health problems and even death, particularly those cleaning drains.

So, the criteria for job of a sweeper/sanitary workers in Pakistan is just you should be "NON-MUSLIM ONLY"!!

Your job is to make filth only, and our is to clean only! pic.twitter.com/NxuAILWu87

In 2015, the government of Punjab province removed rules associating sanitation work with Christians and other minorities. However, progress remains slow. In August last year, Dawn, one of Pakistan's most prominent newspapers carried an advertisement on vacancies in the Pakistan Rangers paramilitary force. The vacancies for sanitary worker mentions, in brackets, “non Muslims only”.

In January, the Swabi district council in Khyber Pakhtunkhwa province passed a resolution demanding that all sweepers in the district hospital be Christians only. The resolution added that any Muslim working in post of sweeper be transferred to positions such as peon or guard. The resolution was moved by Akmal Khan, a member of the Pakistan Tehreek-e-Insaf, the party founded by Prime Minister Imran Khan.