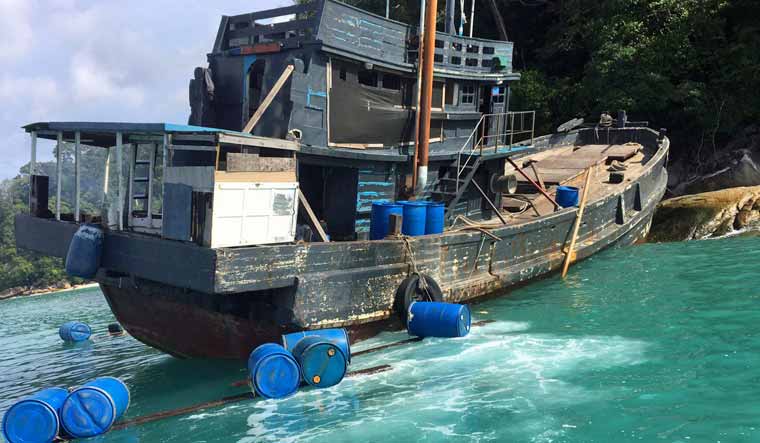 A fishing boat which according to officials was smuggling Rohingya refugees is seen stranded at Rawi island, part of Tarutao national park in the province of Satun, Thailand, bordering with Malaysia | Reuters

65 Rohingya Muslims were found shipwrecked in a boat discovered early Tuesday in the Tarutao Marine National Park in southern Thailand, about 400 kms away from Myanmar border. Investigation is going on to determine whether they have been trafficked.

Approximately 740,000 Rohingya have fled Myanmar since a brutal military crackdown in 2017 against the minority in the country with Buddhist majority.

Also read: How does Asia fare when it comes to freedom of press?

According to Kanjanapan Kamhaeng, chief of Tarutao National Marine Park, park officials were told by Thai and Mayanmar locals that their ship was broken down. And that's how they came to find boat carrying the Rohingya.

In light of the military crackdown, most have escaped into overcrowded refugee camps in Bangladesh, whereas others have fallen prey to human trafficking rings as they seek better lives in Malaysia or Thailand.

31 women and five children were among the Rohingya on the shipwrecked boat, according to a Thai spokesman..

According to sources, the boat smashed into a rocky shore.

"Authorities are not ruling out other issues such as human trafficking," an Internal Security Command (ISOC) source in Satun province said.

Myanmar has said the 2017 crackdown was aimed at rooting out insurgents who attacked military posts.

United Nations investigators have said the violence amounts to "genocide" and called for the prosecution of top generals.