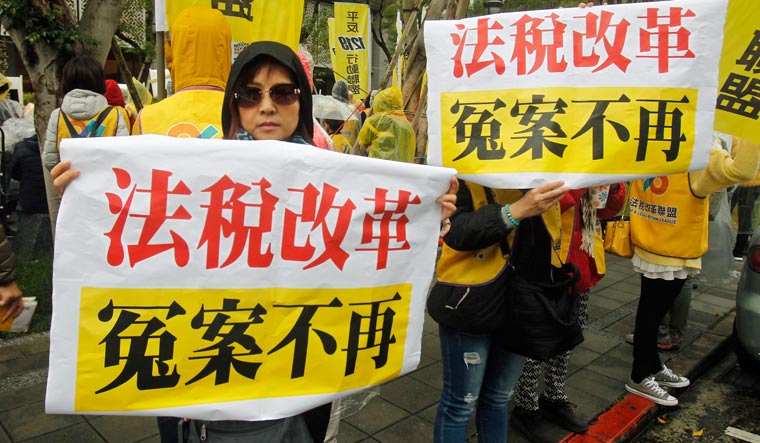 Protesters hold slogans reading "Tax Reform. No more Miscarriage of Justice" outside of Ministry of Finance in Taipei, Taiwan | PTI

Taking a page from France's yellow vest movement, thousands of Taiwanese, protested Thursday for the third time in a week to demand lower taxes and the fair handling of tax disputes.

Wearing yellow vests, they shouted slogans and blared air horns outside the Ministry of Finance in Taipei, the capital city, and waved banners calling Taiwan's tax collection policies illegal. Some wore clear plastic raincoats over their vests in a light rain.

"This is about our futures," said Joanna Tai, a 23-year-old English language graduate student who plans to teach after graduation next year.

"We look at wages in Hong Kong and mainland China. We want to know why there's so much of a gap with Taiwan," she said.

The protest was called for by The Tax & Legal Reform League, an activist group, after marshalling about 20,000 people outside the presidential office in an initial demonstration a week ago, and another 10,000 on Saturday.

The organizers said they were inspired by the success of the recent French protests, which turned violent and were blamed for 10 deaths. The Taiwanese protests have been peaceful.

French President Emmanuel Macron eventually agreed to scrap a tax hike for gasoline and diesel, increase the minimum salary for full-time workers as well as other steps.

"We saw Macron and he wanted to soften up, so that gave us some encouragement to protest, so we hope the president here can hear our voices," Reform League media liaison Wang Chih-lan said.

"The Ministry of Finance is the major culprit. It's a big organization that's causing poverty in Taiwan."

A ministry spokeswoman said earlier this week that anti-tax activists have been pushing for lower taxes for about 20 years.

Protesters said they had received tax bills sent in error or asking for too much tax. An appeal costs too much, they said, and tax collectors sometimes keep hounding them for taxes even after losing in court. Income taxes add hardship to young people in low-paid, entry-level jobs, some said.

The average monthly wage in Taiwan is $1,364, and the minimum wage is set to rise to $750 in January. During her campaign, President Tsai Ing-wen said she would work on wages and welfare for youth.

Taiwanese who earn less than $2.42 million New Taiwan dollars (about $78,500) a year pay no more than 20 percent in taxes, according to data compiled by professional services firm KPMG.

KPMG ranked Taiwan 33rd for the world's highest taxes on a list of 135 countries and regions. France ranked 12th.